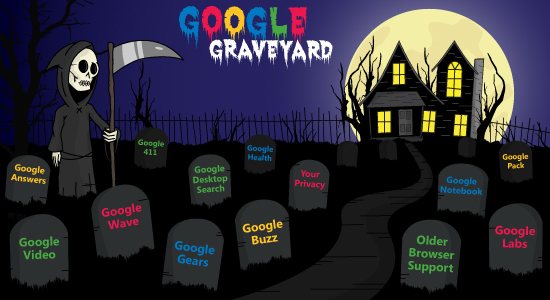 Google is a gambler like no other in the world. You’ve probably heard of Google – now under the umbrella of Alphabet, Inc. – acquiring nearly 200 companies over the years, but do you know how many products they regularly kill off because they’re not economically viable?

In 2016 the company released a slew of key products like the Google Pixel smartphone, Google Home smart speakers, Duo for video calls, Allo the messenger app and several others yet to come. But what are the products they killed this year?

After launching YouTube Live, the company decided to kill off Hangouts on Air. The live streaming video service was thought to be redundant in light of YouTube Live and was, therefore, axed in September this year.

Probably the biggest assassination was that of the Nexus brand of smartphones. Prior to the launch of Google Pixel, the company decided to cut off air supply to its Nexus brand and instead do the #madebygoogle thing. It isn’t officially dead yet but with Google increasingly focusing on ChromeOS, Android and their love child, the Andromeda hybrid OS, it looks like the end of the line for Nexus.

After launching Google Photo last year, spinning it off from Google+, Picasa seems to have been pushed to the background. Google Photo is much more robust as a service for storing and sharing photo and video content. In case you’ve ever wondered, Picasa is, indeed, a play on the name of famous painter Pablo Picasso.

Project Ara, which was supposed to be responsible for researching, building and releasing modular smartphones, was officially pronounced dead not too long ago. These phones were supposed to be easily upgradable by slotting hardware components such as cameras, displays and processors. It’s very similar to what Microsoft is reportedly doing with the Surface All-In-One PC expected to be unveiled on October 26 at a Windows 10 event in New York.

Chrome Apps for Mac, Windows and Linux is dying a slow death as well this year. By removing Chrome Apps, the company hopes to make Chrome lighter, simpler and faster than it is. It also announced that it would remove Adobe Flash from Chrome, and default to using HTML5 for video content. Again, this is intended to make Chrome leaner and less resource-hungry, which is currently a significant issue for Chrome users.

There are several other initiatives from the world’s biggest search provider that have already sung their swan song this year or will soon do so. They include My Tracks in favor of Google Fit, Google Compare, a comparison site for credit card, insurance and mortgage rates, and Panaramio, a location-based photo-sharing app that Google will now replicate on Google Maps as a native function.

And there’s your Google Graveyard update for 2016. It’s good to know that such a big company is willing to take failures on the chin and keep moving despite so many failed products and services.

Kind of reminds me of Michael Jordan, now that I think of it. Here’s what the basket ball legend said was the secret to his success:

“I’ve missed more than 9000 shots in my career. I’ve lost almost 300 games. 26 times, I’ve been trusted to take the game winning shot and missed. I’ve failed over and over and over again in my life. And that is why I succeed.”

Google Glass is Back: Glass Enterprise Edition to Compete with Microsoft HoloLens

Google Unethically Buying Its Own Ads to Rank Higher on Search?