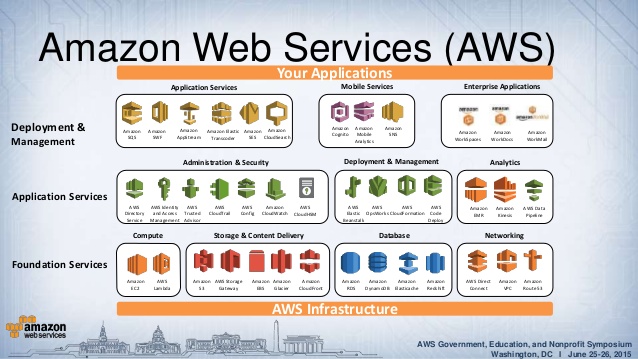 Amazon Web Services, or AWS, the current king of Infrastructure as a Service (IaaS), has once again proved that their leadership position remains undisputed. AWS continued its tradition of posting quarterly sequential growth during the fourth quarter of 2016, reaching $3.546 billion in revenues, representing growth of 47% compared to Q4-15 and $305 million more than their Q3-16 numbers.

Just a quick look at the last three quarters will reveal that their sequential sales expansion increased in 2016 compared to 2015. Despite reaching a run rate of more than $14 billion, Amazon Web Services continues to expand at an extremely fast pace, posting nearly 50% growth year over year.

The fact that they are able to add +$300 million in sales sequentially (from one quarter to the next) shows that the growth momentum is still very much intact and that a slowdown in the short term is out of the question.

If Amazon Web Services continues the current trajectory, an annual revenue figure close to or more than $20 billion will be possible in the next four to six quarters. That will be a monumental achievement for a hard core retailer competing with top tech companies of the world.

During the recent quarter, AWS’s competitor Microsoft announced that annualized commercial cloud run rate has exceeded $14 billion. Amazon possible makes a little bit more from cloud than Microsoft, but the latter makes a hefty sum from its SaaS product line-up led by Office 365. The fact that Amazon is still a little ahead of Microsoft without a significant SaaS portfolio is testament to the kind of strength AWS has in the IaaS space.

AWS continues to be the most profitable unit for Amazon with an operating income of $926 million, compared to $816 million from Amazon’s North America retail unit. During the fourth quarter earnings call Amazon CFO Brian Olsavsky told analysts that Amazon had cut prices seven times during fourth quarter, and added more than 1000 services and features in 2016 compared to over 700 in 2015.

The process of cutting prices and adding more services helped AWS operating numbers nicely, with the segment reporting an operating margin of 31.3%.


At these levels Amazon does remains the company to beat because, with such fat margins, engaging Amazon in a price war is not going to work for any competitor. The unit has enough bandwidth to withstand any price onslaught.

The only way to compete with Amazon is to have a better offering and add more value to your services. But even here, Amazon is leaving no wiggle room. How does a competitor match up to a company that has added thousands of services, is laser-focused on cloud infrastructure, keeps cutting prices without waiting for someone else to do it first, keeps slowly but steadily expanding its data center footprint and has $14 billion to show for it.

The relentless Amazon is possibly the best thing that happened to the cloud industry because they will keep everyone on their toes, including themselves.