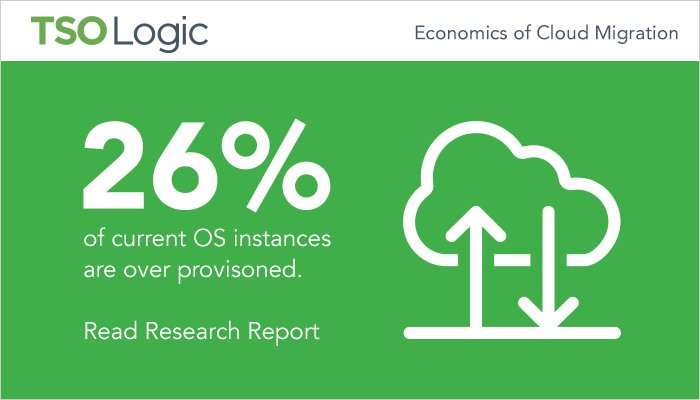 According to a recent statistical analysis conducted by TSO Logic, an analytics and automation control provider, the economics of cloud computing deployments have already become too hard to for enterprises to ignore. The company analyzed over 10,000 physical servers and 25,000 virtual OS instances across its its North American Customer base to derive its conclusions.

Essentially, TSO Logic says that, across its sample, 45% of virtualized OS instances could be run more economically on the cloud, generating an overall cost savings of 43% annually.

26% of current OS instances remained over-provisioned based on historic utilization. Right-sizing those instances or migrating to the cloud for actual utilization would generate a 36% cost reduction.

The next finding is sort of an eye opener: the company says that nearly a quarter of servers that it analyzed were more than three years old, and a mere update to newer hardware would result in strong gains.

A lot of what TSO logic says makes sense, because over capacity and hardware upgrade cycles tend to have a huge economical impact on overall IT operations.

As cloud service providers keep nudging their prices downwards – as Amazon and Microsoft have been doing – the cost benefits of cloud migration are slowly becoming too hard to ignore.

That cost differential between in-house IT infrastructure and their virtualized equivalents on cloud computing platforms will only keep increasing, putting enterprises in a very tight spot.

That’s already happening because CEOs are now under immense pressure to bring down their IT costs, and the downward trend in the pricing of cloud computing and related products is bound to make the migration decision for cash-inefficient companies an easy one.

The full report by TSO Logic can be read here.