In what is becoming a regular feature for deep-pocket tech companies, Facebook and Microsoft have recently announced a collaborative effort with Telxius (Telefonica’s new infrastructure division) to deploy, operate and manage a subsea cable from North America to Southern Europe that will be capable of transferring 160 Terabits of data every second.

This is the first undersea cable that will run South of all other transatlantic cables, and will enable more reliable connectivity between the data hub in Northern Virginia and the one in Bilbao, Spain. From Spain, it will be connected to network hubs in Asia, Europe, Africa and the Middle East.

The implications of this agreement are far-reaching in that Facebook and Microsoft have both recognized the rapid growth of internet connectivity and the need for reliable high-speed internet. In fact, both companies are drivers of this growth, with Microsoft offering more than 200 services on the cloud, and Facebook getting into aggressive mode on video sharing and video advertising.

Facebook is highly dependent on the mobile video segment for its future revenues and Microsoft is pushing its cloud services agenda equally hard for the same reason. In order to be able to provide a superior experience to users of these applications and services, the companies have decided to take this step and make data transfers faster and more accessible to users across the globe.

What Does This New Cable Mean?

The new submarine cable is primarily designed to handle the future needs of Facebook and Microsoft users, but it will carry a whole lot of other data as well. To put its capacity in perspective, four years ago the typical connectivity speeds of transatlantic cables were between 10 and 100 Gbps per optic fiber. The bundling of multiple fibers into a single cable gives the world’s fattest cable – the TGN-P, which goes across the Pacific from USA to Japan – a maximum capability of about 7 Tbps, so the new cable – dubbed MAREA – will have 22 times the design capacity of the TGN-P.

When transmitting video or other large packets of data between network hubs, a high-speed connection is a basic requirement. Microsoft’s cloud services, which include Office 365, Skype for Business and Azure Cloud Platform require high speeds with low latency in order to function effectively. The end result is that the customer or user will be able to access services literally at the tap of the screen or click of a mouse. And that’s what makes data movement such an expensive affair.

And because these services are so critical to future revenues of both Microsoft and Facebook, they have made the decision to run the new cable and have it operational by October 2017. The cable will be 6,600 km long and will run South of other transatlantic submarine cables.

How Fast is Data Consumption Growing?

According to recent sources, data consumption on mobile devices alone is going to increase at a CAGR of 57% until at least 2019, when data volumes are expected to reach near 25 Exabytes per month, up from the current estimates of between 3 and 5 Exabytes per month.

This type of exponential growth is a reasonable assumption, considering that video data alone accounts for 55% of all mobile data traffic. In addition, the current volume of web traffic shows an annual growth rate of 21%, which means it will cross 100 Exabytes per month sometime during late 2016 to early 2017. In addition, the source below states that 84% of internet traffic in the United States will be from video consumption – something Facebook is banking on heavily. 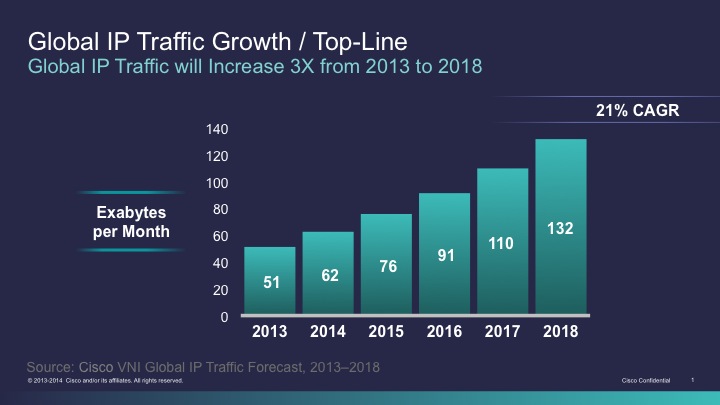 The data needs of the world are expanding rapidly, and Facebook and Microsoft are two of the key data drivers of the future. Preparing for that future now is an astute call by the respective management teams. It will not only benefit their own users directly, but internet users everywhere from the United States to the farthest corners of rural Asia where internet penetration is still low but growing at a clip as devices and high-speed connectivity both continue to become cheaper by the day.

Why “Retro” Video Poker Still Deals Excitement in the 2020s