Microsoft is so confident about the photo quality of its Pix iOS app that the company claims they’re better than the ones taken using the iOS Camera app.

With Nokia being an epic fail for the software giant, and an insignificant market share in the smartphone space with their Windows Phone operating system, Microsoft is going all out to enter iOS and Android with a slew of apps.

Essentially, Pix uses artificial intelligence (AI) at the back end to capture clearer, more realistic images. When the shutter is clicked, the app takes a burst of shots and picks the best one to save. It also uses Hyperlapse technology to stabilize videos taken with the app. In addition, it can also create a mini-video clip when there are moving elements in the shot. 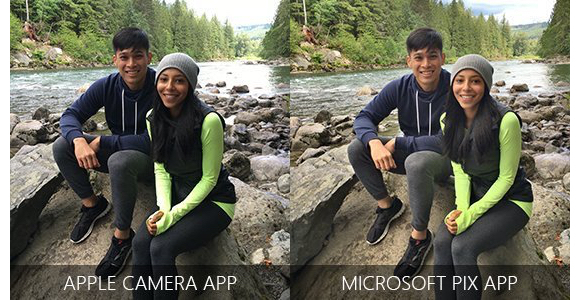 The Pix app was developed at Microsoft Research, a division that, until now, has not released any product directly to the market. It is also the team behind Microsoft’s Intelligent Cloud and Cortana, the Windows virtual assistant.

With this move, Microsoft has made a bold statement to Apple – that it will encroach into its territory to claim its stake in the mobile wars.

Skype was one of the first apps that they built out for Apple and Android devices because they didn’t really have a choice. The demand was that high. But now, it’s a matter of getting a larger presence in the apps space itself.

Here are just some of the Microsoft Apps available on both iOS (Apple App Store) and Android (Google Play) platforms:

These are just a few examples of how Microsoft intends to strategize its move into the mobile space. With the company acquiring app development platform Xamarin earlier this year, it’s clear that they’re intent on creating a large body of apps that will work on Windows 10, iOS and Android.

In a way, it’s a backdoor entry for Microsoft to get a second chance in the mobile space. They were unceremoniously thrown out the front door with the Nokia fiasco, but they’ve gotten smarter under the guidance of CEO Satya Nadella.

The new Microsoft Pix app is just another milestone in their journey towards gaining mobile market share – one way or another.