Amazon Prime is, without a doubt, one of the most successful loyalty programs of all time. With an estimated 54 million members in the United States and nearly 80 million worldwide, it’s safe to say that it rivals and even goes beyond the erstwhile king of loyalty programs – that of Costco Wholesale. You can read about how big Amazon Prime is in this recent article HERE. 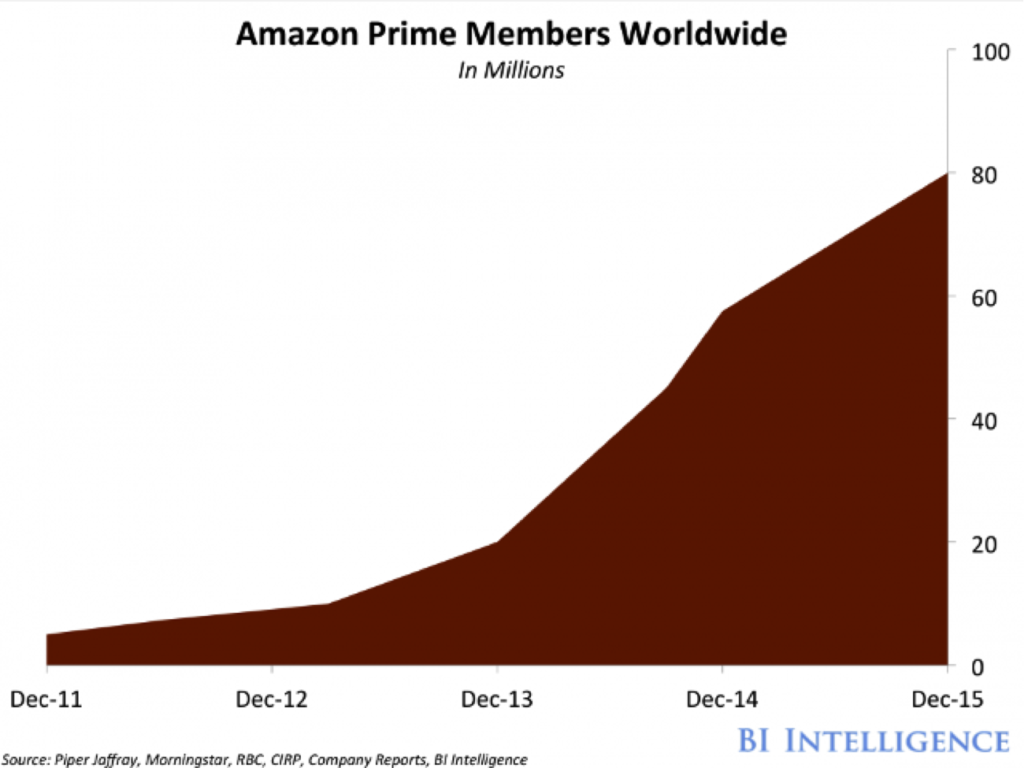 With such a successful service operating and growing strong for more than a decade, why is Amazon now going local and focusing on grocery and food deliveries with Amazon Prime Now?

What is Amazon Prime Now?

Prime Now is essentially an extension of services for Amazon Prime members, and involves test runs in certain cities for food and grocery deliveries. But Prime Now is not just about food-related products. The key features of Prime Now are the free two-hour grocery delivery and one-hour restaurant delivery that they’re essentially testing out in a few cities across the United States. They also have a free same-day delivery service on select items. Same-day and two-hour deliveries are currently free, while one-hour upgrades will cost you an extra $6.99 except for restaurant deliveries, which are free.

Let’s see what’s available in your city and how you can take advantage of Amazon Prime Now.

What are the products eligible for two-hour delivery?

From sporting gear to eggs to headphones to fresh avocados, Prime Now offers over 25,000 products on the two-hour delivery commitment. Products are available across 25 different categories including electronics, household items, gifts, groceries, sporting goods, seasonal items and much more.

Amazon doesn’t specifically say what items are available in what cities, but looking at their delivery network for food items, we know that these cities are currently covered – but only specific zip codes within them:

Prime members are currently eligible for this service, and Amazon keeps adding more cities and zip codes to the list on a regular basis.

Across the pond Amazon Prime Now is also available in European cities. Here’s the current list:

Scotland: Glasgow was first, but the service is now open to Motherwell, Kilmarnock and Cumbernauld as well.

France: The service was launched in Paris in June but Amazon faces flak from the french government for threatening to put local businesses out of…well, business. We’ll keep you abreast of developments here. As of now there is competition from local site La Belle Vie as well as Carrefour Now, part of Carrefour Group, the world’s fourth largest retail group after Wal-Mart, Tesco (UK) and Costco.

Germany: Currently available in Berlin and München, could roll out to other cities soon.

In addition to the same-day and two-hour options, certain cities in the United States are also eligible for restaurant deliveries within one hour. These cities currently include Manhattan, Seattle, Dallas, San Francisco, Los Angeles, Chicago, San Diego, Austin, Atlanta, Miami, Baltimore, Minneapolis, and Portland, OR.

Amazon is also trying to go truly local and letting shoppers in some cities buy from popular local brands. For example, shoppers in Chicago, Los Angeles, Manhattan, Portland (OR), San Diego, and Seattle can shop online for products from Sprouts Farmers Market, Plum Market, Eataly, Sprinkles and New Seasons Market as well as Amazon’s own produce line where available. 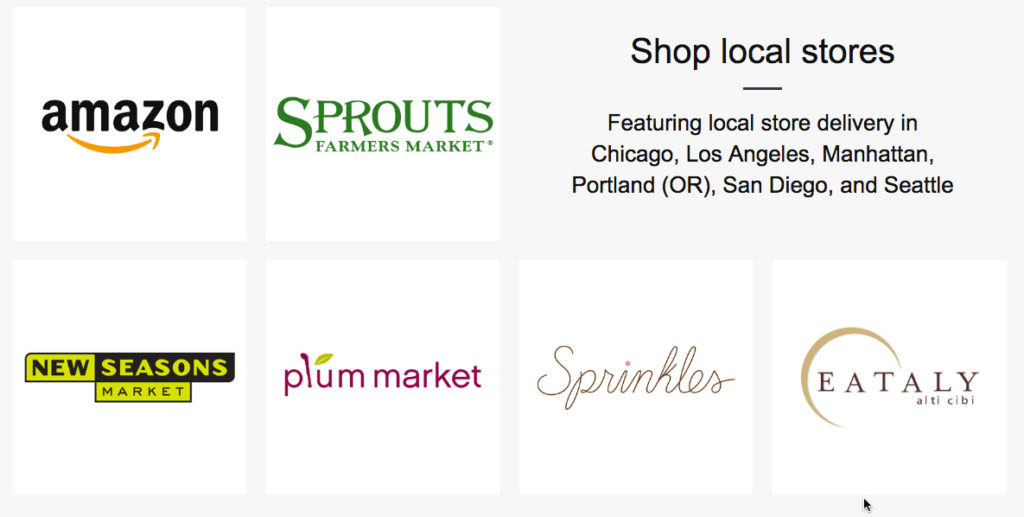 Why is Amazon doing this?

Amazon wants nothing more than to grow bigger and deeper in every part of the world. They’re not really concerned about profitability, and Jeff Bezos has long been able to convince the company’s investors that growth is preferable to profitability.

As such, Amazon is starting to see some geographic limitations now that they operate in over 16 countries across the world, including China and India. But the biggest gains are from developed nations, and this is where Amazon is trying to go deeper into the lives of shoppers.

Until now Amazon has been merely an e-commerce player selling non-perishable items, but this move into perishables, groceries and restaurant deliveries can only mean one thing: Amazon is now ready to do battle with the biggest retailers in the world that offer cheaper prices as their biggest benefit. 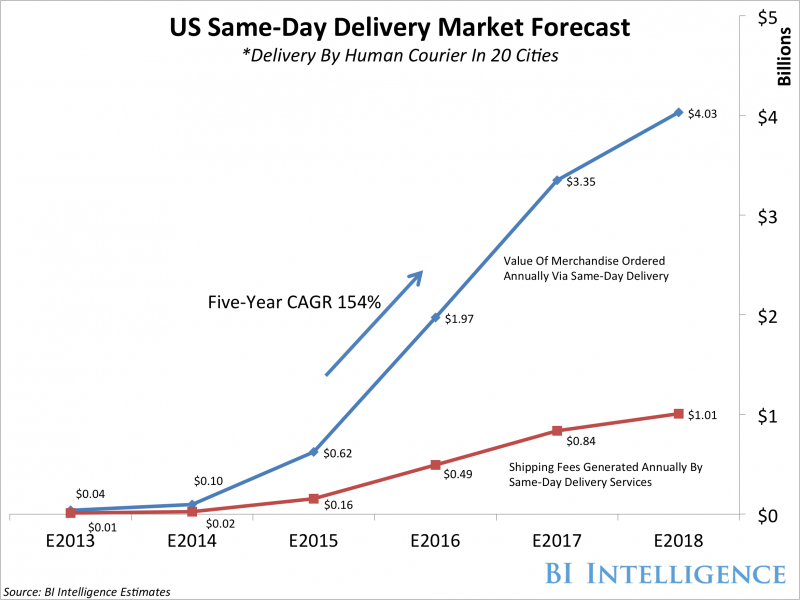 Amazon can’t compete on pricing because of the high cost of shipping, yet they’re willing to lose money and do same-day and two-hour deliveries FREE for Prime members because they want a chunk of grocery and restaurant delivery market shares. The supermarket segment accounts for about $365 BILLION each year, and 90% of that is primarily grocery sales. Of course, that number could be way off, but this was as of last count at the beginning of 2015.

The online food ordering industry is also growing at a massive rate with players like GrubHub, Deliveroo, Delivery Hero and JustEat being just a few examples.

The funny part is, despite the popularity of online food ordering, did you know that penetration in the United States stands at a grand total of 1%? Who knew?!

So that’s what Amazon wants to get its hands on. As a company that’s after top line growth, there are hundreds of billions of dollars sitting on the table and Amazon wants a big piece of that pie.

It may be years before Amazon Prime Now is able to operate in all the world’s major cities, but they’ll eventually get there.