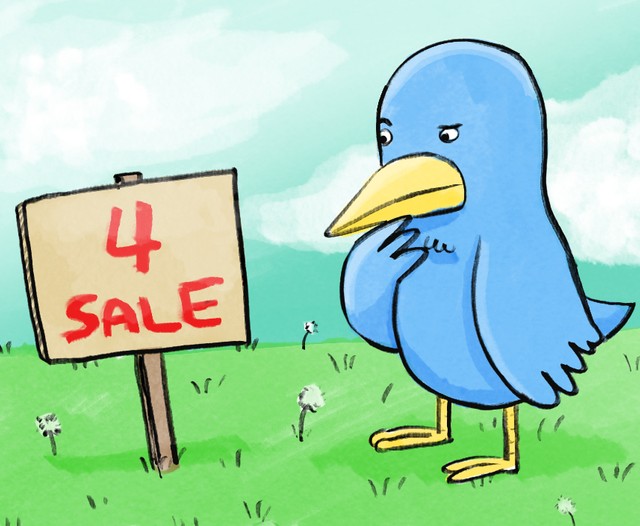 Twitter may have placed itself for a sale according to a recent report by CNBC. Several major sites like Wall Street Journal, TechCrunch and Bloomberg have also reported on the developing story, so there is a chance that the rumor might end up catching fire.

Even if the rumors prove true, the move does make a lot of sense for Twitter. Compared to rival social media platform Facebook, Twitter hasn’t been able to show significant user growth in several years. Twitter’s user base has grown from 30 million global users in 2010 to 313 million users this year. The tenfold increase would have been a great number for most companies, but for a social media platform it’s the final count that matters, not just the pace of growth. Case in point: Between 2010 and 2016 Facebook’s global user base grew from 431 million to 1.7 billion.

To further exacerbate the problem, Twitter has been bleeding money while its rival Facebook keeps posting record-breaking numbers every quarter. One of the biggest problems with a relatively small user base is that it’s harder to pitch value to potential advertisers.

Think about it. Why would an advertiser choose a company with stagnating user growth over another that keeps posting record growth and keeps expanding by buying new user bases (read Instagram and WhatsApp, both of which Facebook acquired)?

To make itself more attractive to advertisers, Twitter was forced to reduce its pricing and offer a more cost-effective deal to potential ad clients, thereby pushing itself into a tight corner. It now faces the multi-pronged problem of a smaller user base, low advertiser interest, lower revenues and therefore less money to invest back into growing the company. If there’s such a thing as a vicious circle, this is it.

If you see the graph below, you’ll notice that Facebook started breaking away from the pack way back in 2013 when its average revenue per user was very close to that of LinkedIn. All three companies seem to mirror each other’s ARPU growth, but Facebook is the obvious leader, and has been for several years now. 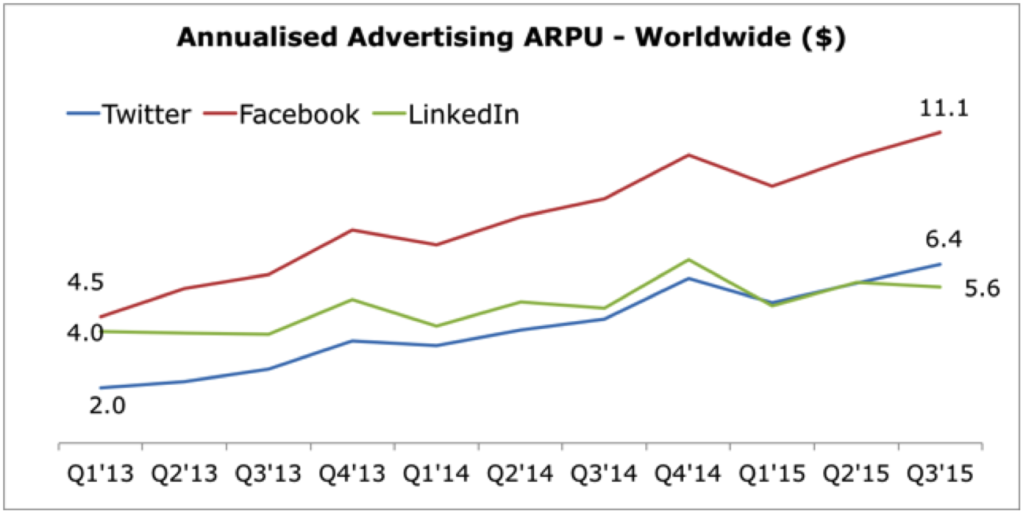 So, faced with the problem of breaking out of its cycle, Twitter embarked on a new plan of action – live streaming video. The company recently made deals with several sports leagues and athletic associations, and subsequently aired its first NFL game on Thursday, September 15, when it received 243,000 views for the live streaming broadcast.

But the competition is already fierce, with almost all the big tech players fighting for a space in the video market, and Facebook and Amazon being directly in competition with Twitter for live streaming sports programming.

Twitter is a solid platform but it needs lot of investment to move the needle. Organic growth may or may not happen, but even if it does it will need a lot more time to get back into shape. By that time the market will have been easily been swept away by competition.

The biggest advantage Twitter has, outside of Facebook, is that it is the only other promising non-niche social media platform of any significance. LinkedIn does have 433 million accounts, but only 105 million of them are active (unique visiting members per month). And now that Microsoft has moved to acquire them they are no longer a pure-play social media platform, merely a unit of Microsoft. Google’s social media platform Google Plus never really took off, and now Facebook is threatening to close in on them in the online advertising market.

So Twitter is pretty much the only competition left for Facebook in terms of sheer numbers, but even Twitter has a long way to go before it realistically be the Number Two player in the social game. A possible acquisition by one of the interested parties means Twitter can leverage the deep pockets of the winning suitor and embark on a new growth path with far more aggressiveness than they’ve shown so far.

TechCrunch reported that Google, Microsoft, Verizon and Salesforce are all in the Twitter hunt. A multi-party bidding will definitely increase the demand and valuation of Twitter, but every of these companies stands to gain if it can snatch Twitter away from the others.