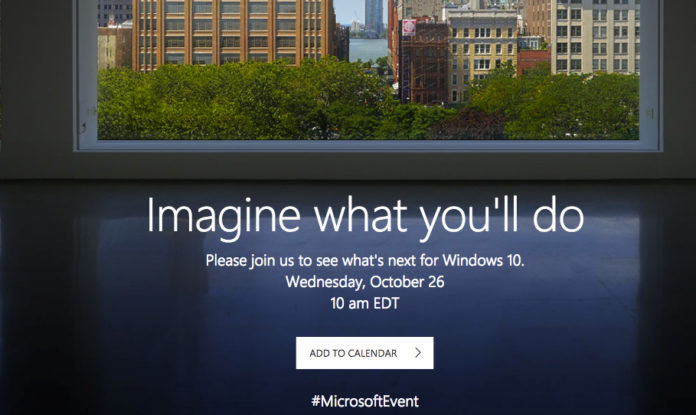 After much speculation, a mountain of rumors and random guesses, the shroud of secrecy around Microsoft’s big Windows 10 event in New York City has finally been lifted. The Redmond software giant today started sending out email invites to an October 26th event in the Big Apple.

Windows 10 Event – What to Expect

Though a Surface Pro 5 may not headline at the Windows 10 event, The Verge reports that knowledgeable sources indicate the release of some “new Surface hardware” as well as an outline of Microsoft’s Xbox gaming strategy that has already begun with the Xbox Play Anywhere platform.

Though a lot of people are expecting Microsoft to launch the highly anticipated Surface Cardinal All-In-One (AIO) PC, the “new Surface hardware” might not point to that. The event is expected to be a little low key, unlike last year’s October event when they rolled out some pathbreaking products like the Surface Pro 4, Surface Book, Microsoft Band, HoloLens Project X-Ray, the Lumia 550 and two variants of the now discontinued Lumia 950 series of smartphones.

If the AIO PC does make the cut for the Windows 10 event, it will be a revolutionary product that takes the path of modular design. We outlined that in detail in an article earlier today.

Surface Cardinal: The All-in-One PC from Microsoft May Feature a Modular Design

Sources in the know indicated that we’re not likely to see a Surface Pro 5 or a Surface Book refresh this year, but instead say that Microsoft “will showcase laptops and devices from OEMs instead.” Not too exciting by the sound of it.

Nevertheless, there’s still that buzz of excitement around the Windows 10 event since we’re so close to seeing several new products from Microsoft, including the Surface Pro 5, the Surface Book 2, the Surface Phone, the Surface Cardinal and some solid news about the company’s strategy around merging the gaming experience on Xbox and Windows 10. You never know what surprise Microsoft might suddenly spring at the October 26 event.