Petrified by small talk? Even when you’re online with an old friend? Don’t worry, Facebook will soon come to your rescue with Conversation Topics, a feature that actually suggests what to talk about when you have nothing to say!

The social media juggernaut is testing an unusual feature that suggests exactly what it’s called – conversation topics. As of now, only a few users seem to have access to this new functionality, and several critics are already calling it “creepy”, “unsettling” and “intrusive.”

For a select group of users, Facebook Messenger has a new section that tells you what your friends have been up to lately…the places they’ve visited, music they’ve listened to and even events they plan to attend in the future.

You can then use any of that information to start up a conversation and keep it going. 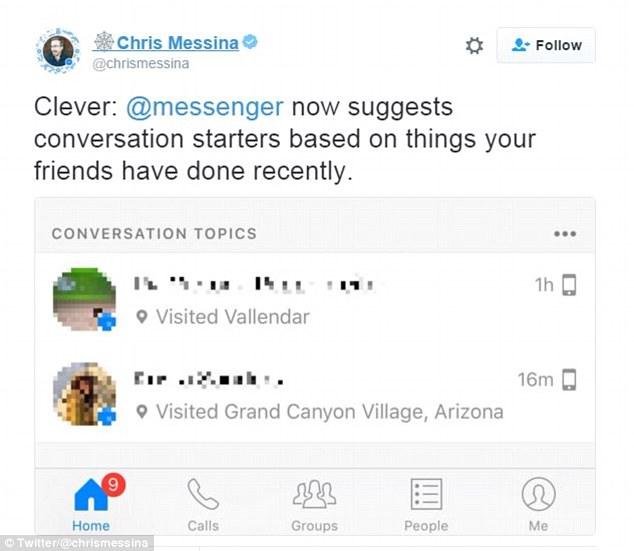 I can understand that this is an attempt to get users to stay on Facebook Messenger for longer periods of time, but I would have to agree with the “creepy” part. However, I do not agree to the intrusive part because we already know that companies like Facebook and Google collect as much user information from each one of us as they can.

The information you’d see in the Conversation Topics section of Facebook Messenger is nothing more than a filtered view of their activity feed. Now, this information is already available for all their friends to see, so how is it intrusive? When we visit a restaurant or publicly post something about a movie we’ve recently watched, isn’t the whole point of doing that to let other people know? Facebook is merely aggregating that information and making it easier for us to talk to that person about what’s relevant to them.

I see nothing wrong with that, really. After all, if you’re tagging an activity or a location, that means you’re okay with people knowing that you’ve “been there, done that”, isn’t it? I can’t see what the fuss is about, to be honest.

Here’s my advice to people who think that Conversation Topics is intrusive – don’t post anything on Facebook that you don’t want people to know about! It really is as simple as that. Don’t people comment on an activity when you make it public? Isn’t that the intent of posting it in the first place?

Frankly, it amazes me how people are reacting negatively to this new feature. In truth, I don’t see it as any different from Google suggesting search phrases based on what I’ve searched before, for example. Or Apple’s Siri reminding me that I have a meeting at 1 pm. When that happens, do I say: “OMG, Siri’s been going through my calendar. Oh, the horror”? Of course, not.

Our information is already out there for everyone to see, and we’re the ones who provided that information in the first place. We checked a bunch of privacy boxes and, in the process, gave these companies permission to use the information to “enhance the user experience” in any way they see fit. This feature certainly does enhance user experience because it tells you what that other person has been doing so your conversation can be relevant and engaging.

I only wish that I had such a feature built into me when I’m at a party with people I barely know. If I did, I could probably stop talking about the weather all the time!

Why “Retro” Video Poker Still Deals Excitement in the 2020s