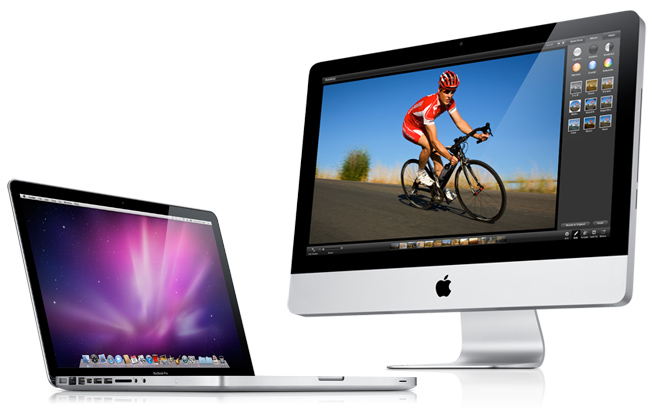 As PC sales around the world decline, device manufacturers are facing the burn. The sale and shipment of PCs have been declining since 2011 and, looking at the first three quarters for PC shipments around the world, it looks like 2016 is all set to be the fifth consecutive year of PC sales decline. According to Gartner, worldwide PC shipments have now declined  9.6%, 5.2% and 5.7% in the first three quarters of this year compared to respective prior quarters. 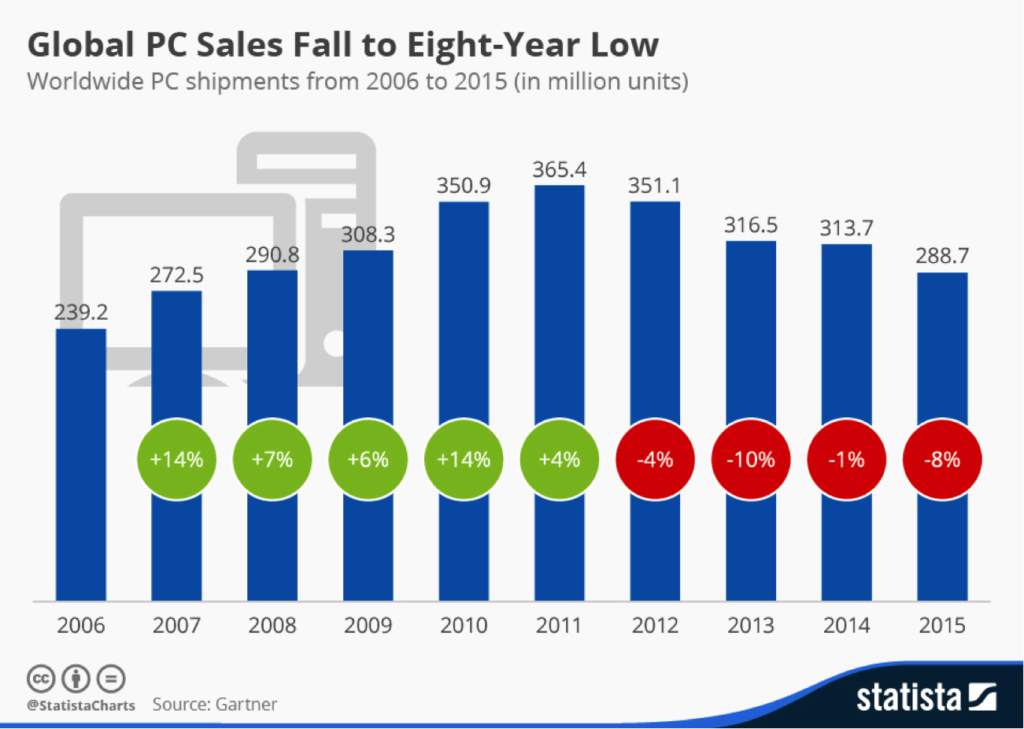 As a premium player in the segment, Apple’s lineup of desktop and portable personal computers has been on a downward slide since the first quarter of this year, and things don’t look promising on that front considering the overall state of the market.

As you can see from the graph above, unit sales have declined at double-digit rates in the last two quarters, hurting a business line that was worth $25 billion in annual revenues last year. The sudden drop in unit sales isn’t exclusive to Apple alone. Nor is it exclusive to the PC segment. Both PC makers as well as smartphone makers have seen sharp declines this year, and the future doesn’t look too promising, either. For Apple, that’s a double whammy, as they say. 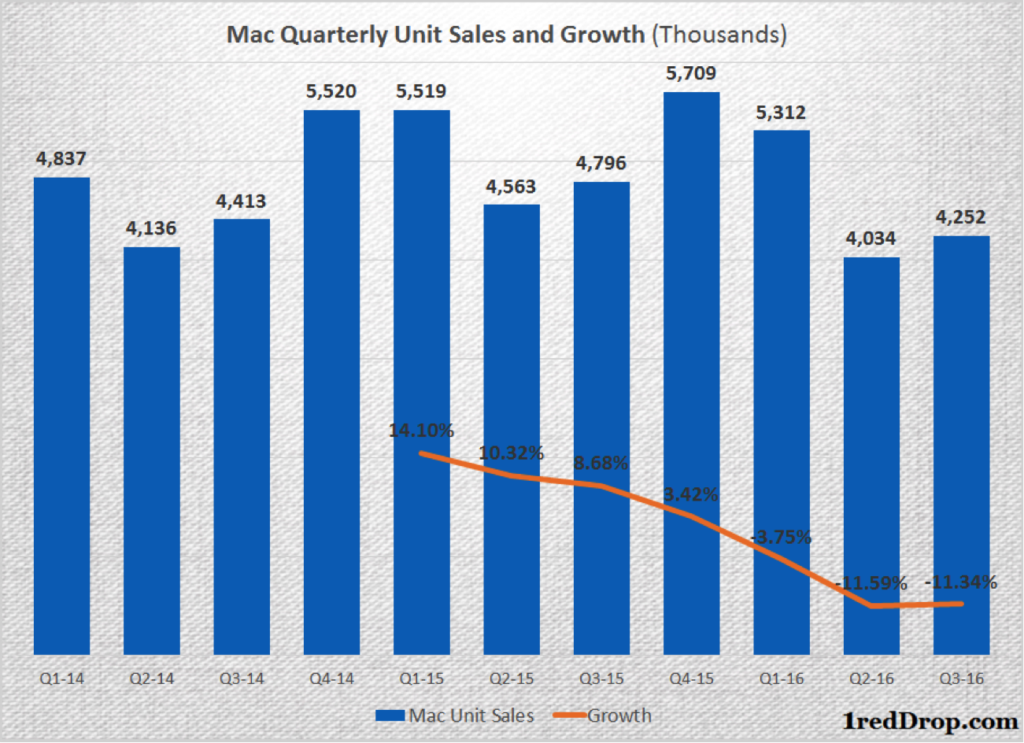 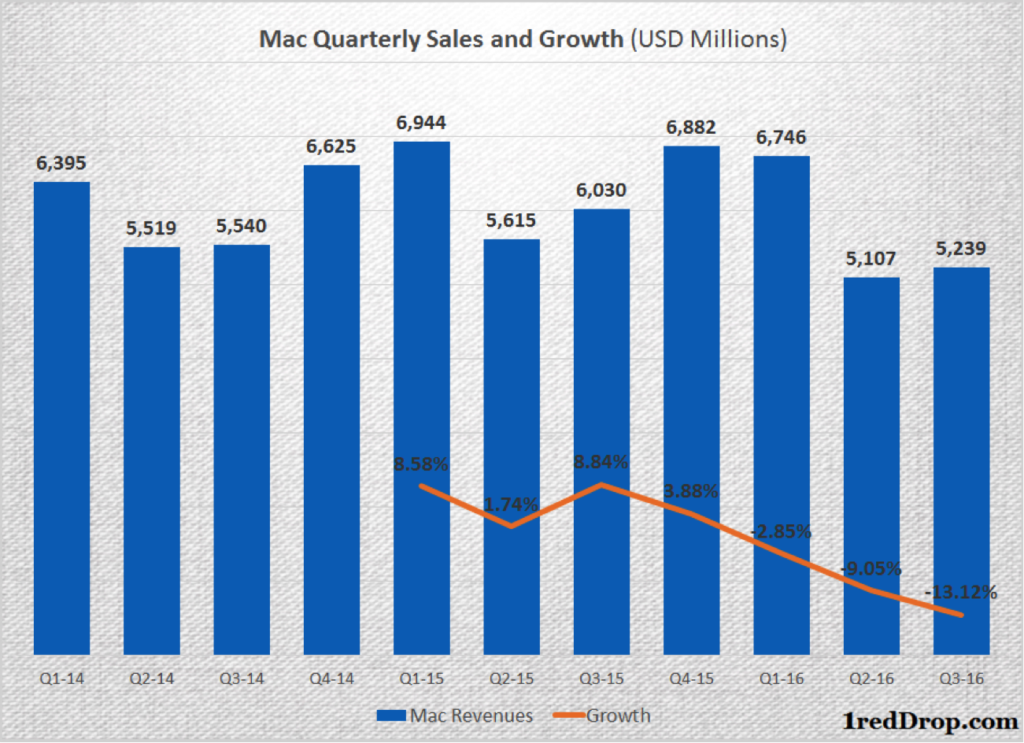 It might be several quarters before things start stabilizing in the declining PC world which, in a sense, was actually started by none other Apple. They’re the ones who started the smartphone disruption around the world. The iPhone single-handedly changed the way we interacted with our phones and used them to interact with the Internet. And since then, these handheld devices and their larger cousins, the iPads, have only gotten more powerful. That power, flexibility and mobility is exactly what is denting the need for desktops and portable PCs.

At this point, PCs have been relegated mostly to the workplace, and possibly a single MacBook or Mac PC for home use. It’s rare to find someone with two desktops at home these days. The “personal computer” is no longer what it used to be. Today’s “personal computer” is the one you have in your hand, and that’s where the disruption in the traditional PC market started. If you want to pin that down to a particular year, then I’d have to go with 2007, when Steve Jobs unveiled iPhone to the world.

As such, the total market size for PCs is gradually shrinking, and it may even speed up with the advent of hybrid tablets that are, for the most part, as functional as regular laptops. They’re almost as fast as the best laptops, they’re much lighter, more versatile…I could go on and on. But the point is, the idea of a stationary computer is all but dead.

The result of that is that traditional PC makers like Apple have nowhere to hide in the short-term. And that’s hurting their top line as well as their growth.

How Will Apple, Samsung Grow in a Hobbled Global Smartphone and Devices Market?