Global payments processor PayPal has decided to tightly integrate with Facebook Messenger. In a blog post released today the company said that it will soon roll out a payment option for its customers that will enable them to make payments via Facebook Messenger. The PayPal-Facebook Messenger integration will also make it easy to link PayPal accounts to Facebook accounts, and use Messenger at the PayPal checkout point.

The company says it also plans to allow users to get PayPal notifications in Messenger, which is, of course, a critical functionality considering the depth of the Facebook Messenger and PayPal integration. 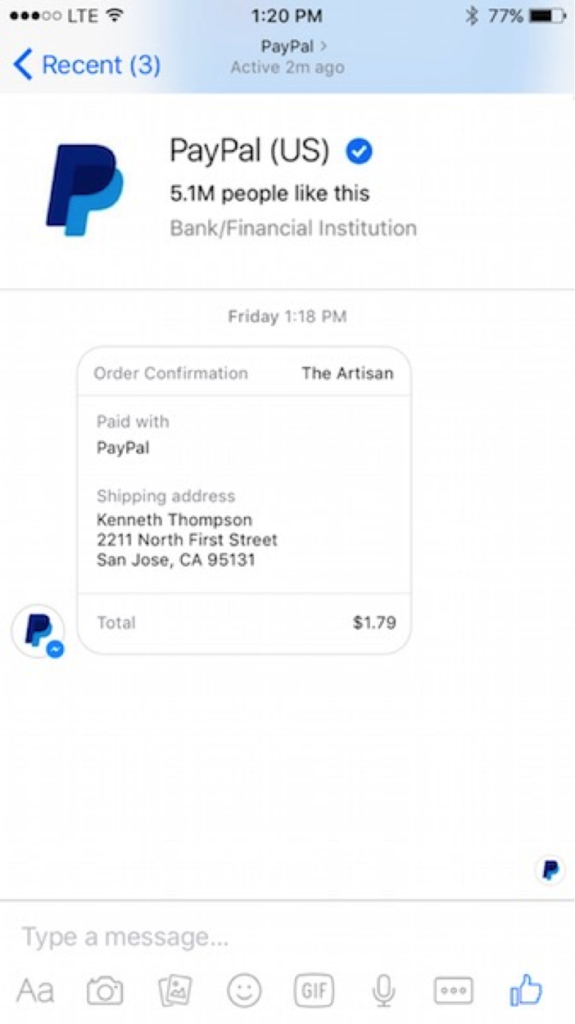 As you know, mobile-based commerce is on the rise, but even though e-payments have already become the de-facto payment method for many, payments on mobiles hasn’t quite taken off yet.

According to Adyen, a global payments technology company that tracks mobile payment data, says that over a third of browser-based online transaction are now made on a mobile device. You would have thought that number would have been much higher considering the proliferation of smartphones and tablets over the past few years, but that’s the extent of its current reach.

In a recent article series about Apple Pay, I discussed that phenomenon and the reasons why mobile payments aren’t yet where they need to be.

But things are changing fast. PayPal’s move to sit inside Facebook Messenger is solid, forward-looking decision. If the last ten years has been the decade of social media, the next ten is shaping up to become the age of messengers. The way WhatsApp and other messenger applications have added billions to their user bases is a testament to that fact.

And you can tell by the amount of time we spend on messaging apps. Take a look at this graph from SimilarWeb for messaging apps data from Android phones in the United States.

As the average time spent by users on messenger rises, companies are scrambling to get their products in front of users. They know full well that if they don’t, then somebody else will. Now throw in some AI-powered bots in the mix and there is now plenty that can be done using messaging apps – like ordering your food, chatting with a customer support person and, soon, even making payments via your PayPal account.

And this isn’t the first time PayPal is working with Facebook on a mutually beneficial project. Earlier this year, Braintree, a PayPal company, partnered with Facebook and Uber to allow customers to hail an Uber cab and pay for it within Messenger. For Facebook, the benefit is that it keeps users within their own product/service ecosystem. For PayPal, obviously, they get to offer their services to members of the largest social network in the world.

The logical step now, therefore, is for PayPal to implement a full-on PayPal integration with Facebook Messenger. And the reason is simply because that’s where their potential users are spending a lot of time. As Facebook integrates more features and services into Messenger, PayPal will see its own usage grow as well.

As services like Apple Pay, Samsung Pay, Android Pay and Venmo (PayPal’s digital wallet) become more popular, it’s natural for PayPal to want to control the bulk of the TPV, or total payment volume that goes through mobile phones. And what better way to do this than to partner closely with a fast growing messaging app that has Facebook’s potential user base of 1.7 billion people at its back? Throw in another billion people on WhatsApp and you can possibly see where this is going in the future.