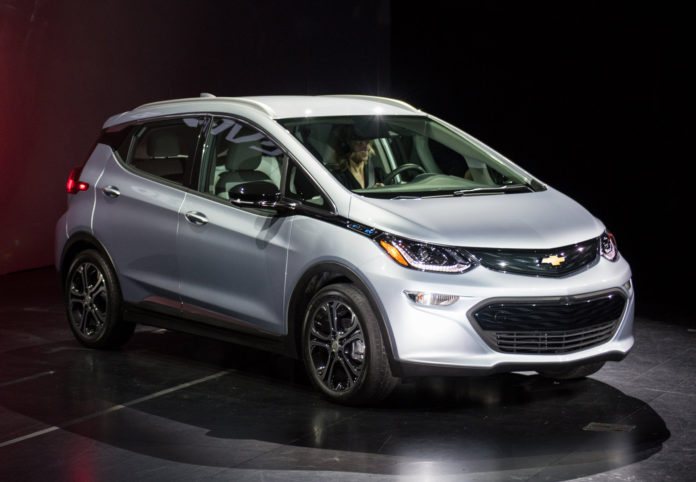 Based on an AP news report that dealers in two U.S. states will get their batches of the 2017 Chevy Bolt EV (electric vehicle) by the end of this year, it is confirmed that General Motors has begun production on the new EV model.

The price of the 2017 Bolt EV is set at $37,495, with $7,500 in tax credits bringing the net price down to about $30,000. Compared to the Tesla Model 3, which is currently priced at $35,000 without incentives, the Bolt is slightly pricier. But with a range of 238 miles on a single charge against the Model 3’s expected 215 miles, GM is pitching the range-for-dollar angle to make it sound more attractive than the Model 3.

In addition, the Bolt will have a significant time lead over the Model 3, which means potential Model 3 buyers will have a chance to see how the Bolt performs before making their final decision. As of now they’ve only paid the $1,000 reservation fee, and that amount is fully refundable if the customer chooses not to purchase the Model 3 after all. That could be a hole in Tesla’s strategy that GM’s Bolt may exploit.

For now, we have confirmation that the 2017 Chevy Bolt will be delivered to dealers in California and Oregon by the end of this year. The car is being produced at the Orion Assembly Plant at Orion Township, Michigan.

There’s a lot of psychology that’s gone in to deciding how much range the Bolt should have. The Bolt’s Product Manager Darin Gesse says that the company wanted to give the car a range that was the equivalent of a half-tank of gasoline for an internal combustion engine (ICE) car. The reasoning behind that assumption is that “With a half-tank of gas, most people don’t worry that they have to refuel for a while and are comfortable driving.”

One analyst at IHS Markit, Stephanie Brinley, thinks that it’s going to be more of a habit-changing challenge than anything else:

“The Bolt’s range more than covers the average daily round-trip commute of about 40 miles in the U.S., and that should give comfort to those who fear running out of power. But there’s always the late night at work and the early meeting the next morning without enough charging time, or the night you forget to plug the car in. Those are tough adjustments for Americans.

We’re trained to believe that wherever we go, we get can get the fuel that we need. With electricity you need to plan that out a little bit more.”

That’s the challenge with any pure EV, but the Bolt does have some advantages over the Model 3. For one, GM has a much more extensive service network across the United States. We don’t have any numbers from GM yet, but at least 2,000 of their 3,000 dealers around the country have the ability to service the Volt, which is the older cousin of the Bolt. Tesla doesn’t even have service centers in all U.S. states, so this could be another pivotal factor in the buying process in certain pockets of the EV market in the United States.


Tesla may well come up with further modifications to the Model 3s battery and give it a 250-mile-plus range to overcome the current disadvantage against the Bolt’s 238 mile range.

When Tesla Glass and the company’s collaborative roofing solution with SolarCity was unveiled last month we speculated that the embedded solar panels could make their way into the Model 3s panoramic glass top.

While that may not contribute anything significant towards the powertrain itself, Tesla can still choose to upgrade the battery pack on the Model 3 and add a few more kWh of capacity. It’ll bump up the production cost by between $150/kWh and $190/kWh, but if it gives them an edge over the Bolt, they may well take that route.

For now, it looks like GM has the lead over Tesla’s Model 3 on several fronts with the 2017 Chevy Bolt electric vehicle. But all that could change once the rubber hits the road.