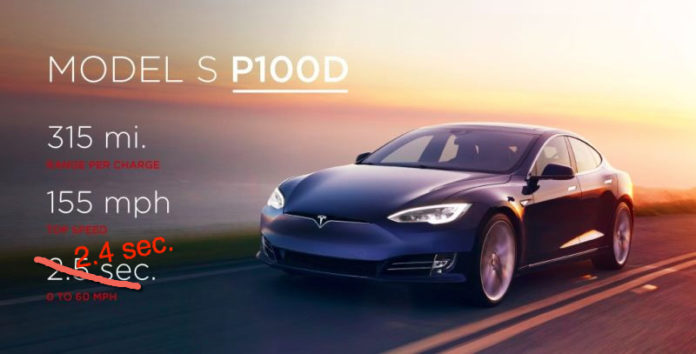 The title for the world’s fastest-accelerating production car is currently held by the Tesla Model S P100D, which goes from 0-60mph in 2.5 seconds. Next month, when these cars get an OTA (over-the-air) software update, they will be able to go from 0-60mph in 2.4 seconds, breaking their own world record.

As usual, the tease came on Tesla CEO Elon Musk’s Twitter account, where he says that the “Easter Egg” feature will have to be activated by the car’s owners. But there’s a catch: the feature can only be unlocked by a series of gestures made by the owner, hence the Easter Egg monicker.

The beauty of this is that the Model S P100D already competes in acceleration time with some of the most expensive production cars in the world, like the Bugatti Veyron 16.4 Grand Sport Vitesse, which comes with a price tag of $2.25 million, the Ferrari LaFerrari at $1.42 million and the Porsche 918 Spyder at $845,000. In stark contrast, the high-end Model S variant costs “just” $134,500.

Tesla’s cars are obviously all-electric, with two motors, and you won’t feel any wheel spin or hearing roaring sounds as with the other cars in that acceleration category. But when you put the pedal to the metal, you’d better have your head against the headrest! The force on your body will be greater than the acceleration due to gravity. In simple terms, if you jump out of a plane versus use a Model S to drive from there to the ground, the Tesla will get you there first!

It’s interesting to note that in the past, software updates – even Easter Eggs – have been about internal enhancements, such as punching the code 007 turning the Model S graphic into the Lotus from the 1977 James Bond movie The Spy Who Loved Me. What’s interesting about it is that this is the first time an update will literally upgrade the car’s performance. Does that mean the Tesla Model S P100D can still churn out more power in the future? We’ll have to wait and see.