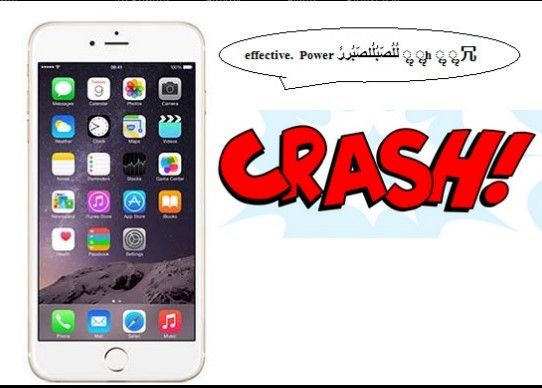 Apple’s iOS is coming under increasingly tough scrutiny as sources revealed a 5-second video that crashes your iPhone about 10 seconds after it’s been played on the device. The video – not posted here for obvious reasons – is typically sent as a link to your device via iMessage. Clicking the link will have the default video player run the file, but the problem happens after you watch the video.

The MP4 file will play normally, but what happens is that it goes into an infinite loop about 10 seconds after it is played. Until then, you can back out of the video and use your apps as usual, but after 10 seconds your iPhone will stop responding. And the only way to get it back to normal is to do a hard reset by pressing the home button and the power button simultaneously until you see the Apple logo on the reboot.

It’s not a major problem per se because it doesn’t lock up your phone permanently or do any irreversible damage, but it’s definitely a bug that Apple hasn’t fixed yet.

This crash bug affects all iOS 10.1 devices, and even those running beta versions of iOS 10.2 which is due to be released in the next couple or weeks or so. Interestingly, the bug only affects your device if you click on the link in your messaging app. It plays normally when you download and open the file.

Back in May of 2015, a similar crash bug was found on iPhones, and the delivery method was the same – iMessage or SMS. However, in that instance it was a string of text that, when clicked on, would crash iPhones on the older OS, iOS 9. More recently, a bug in Safari caused iPhones to crash randomly, but Apple quickly moved to fix that.

iOS has always been considered more reliable than Android, but with several issues on iOS 10, it now seems that Apple isn’t paying enough attention to its OS releases. They’ve not only had problems with iOS 10, but also with the new macOS Sierra operating systems for Macs.

iOS is arguably more secure than Android, however. Pulse Secure’s 2015 Mobile Threat Report showed that 97% of malware for mobile operating systems was written for Android. In contrast, the Department of Homeland Security said in 2013 (pdf file) that only 0.7% of malware threats were directed against iOS devices.


Obviously, nearly 90% of all mobile devices use Android so it’s a bigger target than iOS, which has a market share of just over 10%. As such, Android’s user base is about nine times larger than the iOS’s, which makes it the obvious choice for malware creators.

Nevertheless, these recent bug revelations show that iOS is not as safe as some iPhone users might assume. As far as this particular video crash bug goes, until Apple comes out with a fix (presumably with the iOS 10.2 full release, or possibly on another beta version ahead of that), be wary of MP4 video links. It might be a friend playing a prank on you, but it’s not a pleasant experience.