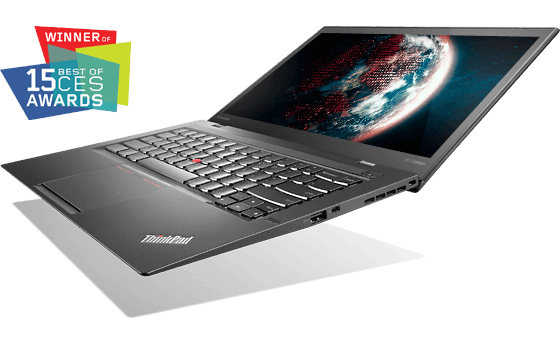 Chinese PC maker Lenovo – the world’s largest, in fact – is making some big moves this year at CES 2017. After launching their own home-brewed version of Amazon Echo and Google Home, called the Lenovo Smart Assistant, they’ve now released their impressive line of laptops and hybrid 2-in-1s.

Among these is the refreshed Lenovo ThinkPad X1 Carbon, one of the nicest looking laptops we’ve seen this year. The name Carbon is derived from the lightweight carbon fibre used on the laptop lid, but the specs inside are anything but lightweight. We’ve already covered the fact that they’re bringing the Windows Precision touchpad to the new line of ThinkPads, and you can see it live on the X1 Carbon.

The laptop also has a smaller bezel footprint around its 14-inch display, in some ways mimicking the Dell XPS 13 with InfinityEdge Display that just came out, but the webcam is still at the top, unlike the XPS 13. The Lenovo ThinkPad X1 Carbon also has an IR camera for Windows Hello support. The touch sensor for biometric access is independent of the OS, making it more isolated and, hence, more secure.

The best part is the 15.5 hours of battery life promised by Lenovo, but under real-world usage conditions, anything more than 10 hours will be pretty impressive – that’s something even the 2016 MacBook Pro is having trouble consistently maintaining.

Unfortunately, there are a couple of drawbacks. No touchscreen option on the Lenovo ThinkPad X1 Carbon line, at least for now. It looks like the company is keeping it exclusively for the Yoga models, but that might change going by what they’ve hinted at.

The screen is 1080p and you have the option of upgrading to a 2560 x 1440 resolution, but considering the really long battery life a lot of users might just prefer the normal HD experience as a trade-off.

On the connectivity front you’ll see 2 Thunderbolt 3 / USB-C ports and two USB A ports. The USB-C port can be used for charging the device as well. No SD card slot, though, so it seems Lenovo, too, has gone the MacBook Pro way.


On the inside of the Lenovo ThinkPad is an Intel U-series processor that promises good performance. Not great, like the premium gamer’s Legion line, but good enough for the average user to browse and run a few non-intensive apps without feeling the lag.

On the whole, it’s a solid laptop with a nice “grippy” feel with zero gloss. And the fact that the X1 line is quite popular, the new X1 Carbon may well extend the product lifetime of this family of laptops until the next model is out.