Razer makes great gaming laptops, but the company’s “Project Valerie” is about to outdo anything anyone else has ever done. Imagine a high-end gaming laptop with not one, but three UHD (4K) screens side-by-side. That’s what the company revealed at the Consumer Electronics Show this year.

When you open the laptop, two additional screens slide out from the main screen towards either side. That gives you three 17-inch screens with stunning visuals that take up a large chunk of your field of vision, giving you a near-VR experience.

At 1.5 inches thick, you’d think it was abnormally large and bulky, but Razer says it’s typical for a gaming laptop to be bulkier than most home or office laptops.

As for the multiple screens, a lot of gamers tend to use more than one monitor, so there’s definitely going to be a market for this unique high-end laptop. Interestingly, industry insiders feel that this is something more along the lines of what Apple might have done. 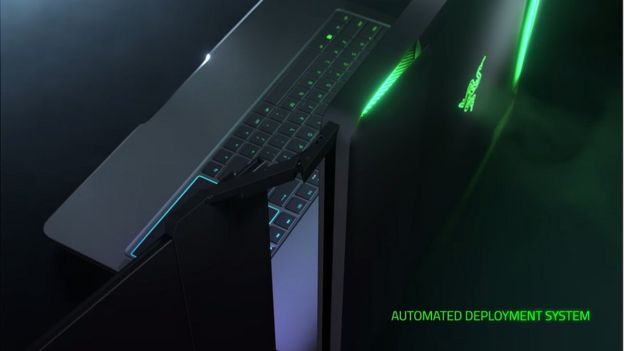 This being a prototype, we’re not clear on when it might actually go into production or be ready for release – or even the price point it will be sold at.

Gaming analyst Jonathan Wagstaff at Context told the BBC that he also envisions “wide interest” for such laptops from architectural and graphic design companies.


That makes sense, because a wider visual plane means more data, more imagery, the ability to see more when zooming in and so on. And being 4K screens, they have the capacity to render color and contrast at a level that professional visual designers will definitely want.

In fact, it’s something the music industry might take a serious look at. Recording studios often use multiple monitors for visuals, editing and so on. A lot of other media-related industries could show interest in such a device as well.