Amazon has no intention of taking over its own logistics needs, but does plan on pushing its agenda for more efficiency in its retail segment. A new announcement from the Seattle-based e-tailer and technology company shows that the company wants to build a cargo hub in Kentucky to handle some of its airborne shipments and Prime Air aircraft.

Amazon already has 16 planes for its own cargo needs, and last year they agreed to lease 40 more planes for Prime Air. But with the kind of shipping needs that this retailer has, one carrier is no match for the number of parcels that Amazon ships out every year. That’s why Amazon lists as many 30 carriers on its website, including the biggest and best – UPS and FedEx.

The decision to build a cargo hub in Kentucky will also create more than 2,000 jobs, which is why Kentucky’s Governor, Matt Bevin, calls it “exciting”:

“This new project will pay dividends to both the company and our state and we are truly grateful for the jobs and economic impact it will bring.”

Amazon has committed to creating 100,000 full-time jobs in the next year and a half, and has also unveiled plans for new warehousing infrastructure in the states of Colorado, Maryland and Texas.

VP of supply chain services at ARC Advisory Group, Steve Banker, considers this to be a boost to Amazon’s operating earnings from retail.

“Amazon still loses money on deliveries, the IT service side of their business supports the retail operations. Owning the whole chain cuts out the middleman fees.”

We can agree with that to point, but Amazon’s North American retail segment is already profitable, and has been so for several quarters now.

For the most recently reported quarter, Q4 2016, Amazon posted $816 million in operating income for North America retail, while AWS posted $926 million. That means, while it’s true that AWS does bring in a larger share of operating profits, the company’s North American retail segment is already profitable on its own.

The reason Amazon is able to keep this segment profitable is because of the scale it has achieved. True, shipping does drain a lot of Amazon’s profitability, but despite losing money on deliveries – especially in the Prime segment – the company has achieved a balance that can only come from scale.

If you still need more convincing, just have a look at their international retail operations. Operating expenses are in excess of net sales because the company continues to invest in growth the way it’s always done. The exact same thing happened in North America until the segment achieved the scale to be profitable on its own.

We do not foresee international operations becoming profitable for quite some time – not while Amazon is in aggressive expansion mode. The more cash flow they generate, the faster they can pump money into growing services and segments, like Prime and China.

The reason their operating profits are carefully controlled is because Amazon needs the money to lure customers with free shipping. It’s their most powerful selling tool, which is validated by the fact that the bulk of Prime customers only join because of the free shipping option. 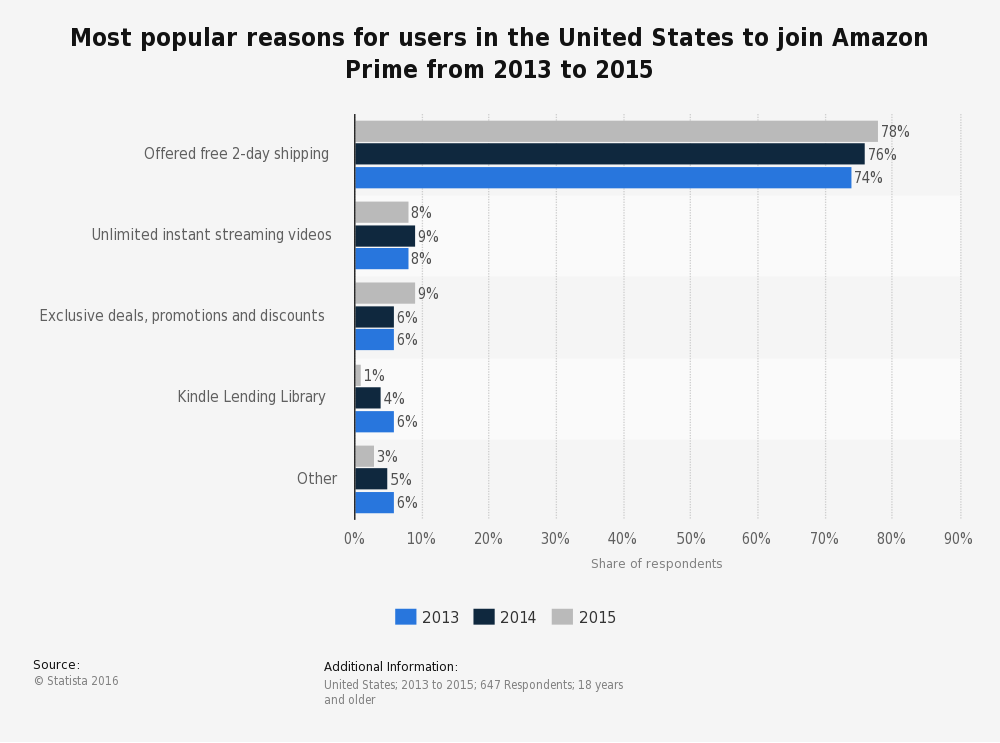 To put it bluntly, free shipping is the bait, and Prime members are the fish. Amazon can do away with free shipping and be immensely profitable in a single quarter, but that will only come at the cost of growth, and Amazon doesn’t want to go anywhere near that direction.

As such, we feel that Banker’s opinion is somewhat misinformed. Amazon doesn’t want to be “owning the whole chain”, as he says. That’s not their objective at all. If they go that route, they’ll have a really hard time being profitable.

How can we claim that? Just look at UPS’s earnings call for the quarter gone by. Because of the 12% increase in B2C shipping, the company took a serious hit to operating profits.

Now apply that to Amazon. The bulk of their shipments are B2C, meaning residential. If even a seasoned logistics company operating at a high level of efficiency – like UPS – is getting hit by an increase in this segment’s volume, what would happen to Amazon’s profitability if it went the same route?

So, clearly, that’s not Amazon’s goal at all. Their motive for adding more airplanes, cargo hubs and warehouses is to be able to control the more time-sensitive shipments they’re continually adding to their portfolio of services, such as Prime Now. It’s more about customer experience than profitability.

That being the case, there’s no question of Amazon “owning the whole chain”, let alone even withdrawing from using UPS, FedEx and other shippers. It would upset their well-balanced shipping model, cause innumerable shipping delays on a regular basis and ruin Amazon’s reputation in the long run.

The company will continue expanding its physical presence in retail and technology, and AWS will continue to be the most profitable segment they have, but it’s because they choose to keep it that way.

Amazon retail is about growth rather than operating profits, but the scale they’ve reached in North America is now helping them show sustainable positive operating income growth in that segment as well. Other markets like India will follow suit when that scale is reached, but not before.