In a recent report published by Gartner, one of the world’s leading market research firms, the company says that 8.4 billion connected devices will be in use in 2017, a growth of 31% over 2016. The company predicts the Internet of Things (IoT) installed base to nearly triple during the 2016 to 2020 period, moving from 6.38 billion devices in 2016 to 20.415 billion devices by the end of 2020.

From a sales standpoint the the staggering volume growth in the connected devices market is expected to drive spending to nearly $2.925 trillion by the end of 2020, from $1.379 trillion in 2016.

The Internet of Things segment is slowly taking off, and most of that growth is coming from the consumer segment. 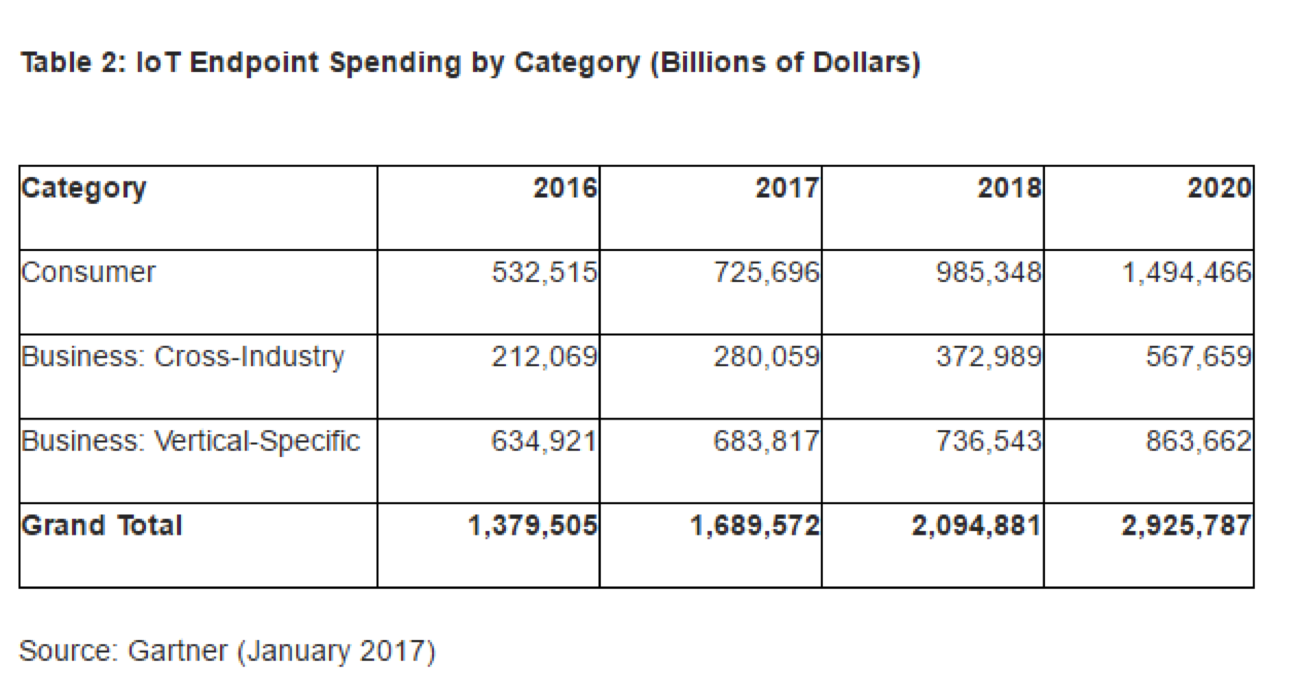 Total IoT services spending (professional, consumer and connectivity services) is on track to reach $273 billion in 2017.


The growth of the cloud computing industry, coupled with businesses rushing to make the most of the expected surge in the connected world, is the reason why the IoT segment is steadily moving upwards.

The $1.3 trillion spending in 2016 includes the entire devices world, covering consumers and business users. As IoT services grow, the devices we already have will transform their utility to another level, while businesses move in to take advantage of such systems to build more efficiencies into them. This will inevitably lead to further growth in the types IoT services available, in terms of industry-specific or problem-specific solutions.

Cloud computing infrastructure players also stand to benefit in a big way due to IoT growth, simply because the data explosion from billions of devices each capturing and sending their data streams will lead to a strong surge in backend infrastructure requirements.


The auto industry is one great example of how the Internet of Things can change a segment. The growth of IoT capability has given birth to an entire industry called connected automobiles, or connected cars.

“Nowadays automakers connect their vehicles in two different ways: First is Embedded connections i.e cars use a built-in antenna and chipset. Second one is Tethered connections which are used in hardware to allow drivers to connect to their cars via their smart phones. Furthermore, app integration is becoming commonplace in today’s vehicles. Google Maps and other navigation tools have begun to replace built-in GPS systems. As per Markets and Market, the automotive IoT market is expected to grow from USD 15.87 Billion in 2015 to USD 82.79 billion by 2022, at a CAGR of 26.75% during the forecasted period.” – IndiaTimes

Automobiles have been around for more than a century, and even navigation systems and satellite radio have been around for a long time. But now, we have leapt forward to a point where cars are able to “talk” to each other, as in Tesla’s Autopilot system, which enables Tesla’s EVs to keep sending information back to a central hub where they can be distributed as real-time feedback to other vehicles running the same software.


So, although the components required for such a system have been in existence for quite some time, it required AI-powered real-time feedback for one car to communicate to other cars that there’s an obstacle coming up that wasn’t there before. Such a system is new even though its individual parts have been around for a while.

That’s the kind of evolution – or revolution, rather – the Internet of Things is bringing to our lives. We’ve had all the building blocks thus far, but they’ve either been too expensive or too complex or simply too impractical to make sense on a large scale. But, together with AI and the power of cloud computing, IoT is changing the face of gadget-to-gadget communication, effectively “turning the familiar into the fantastic.”