Home Business Why is Microsoft Rolling Back Unlimited OneDrive Storage for Office 365 Users? 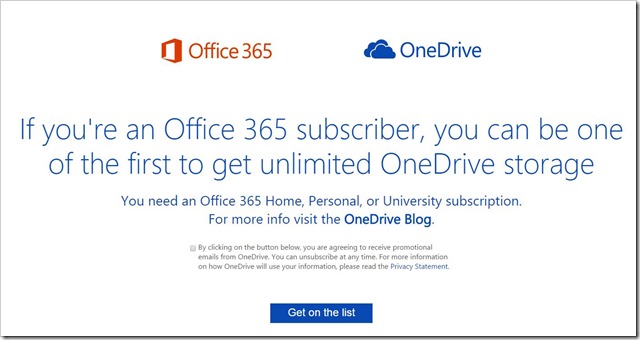 Since December, Microsoft has been planning to remove the unlimited OneDrive cloud storage option on select Office 365 subscriptions, and reset the limit at 1TB. As of March 1, select users that have unlimited cloud storage on OneDrive have had three months to either reduce the amount of stored data or continue on a paid basis.

This is not a hasty decision on Microsoft’s part, since they’ve been sending emails to Office 365 customers who are well over the 1TB level for the past three months. However, it could be seen as an oversight during their capacity planning when they rolled out unlimited storage in the first place.

Amazon offers the same type of unlimited storage option for photos (and 5GB for videos) on the Prime membership, and Google has the same for Google Pixel users. So why did Microsoft alone decide to cap free storage at 1TB?

One plausible explanation is capacity constraints. According to CEO Satya Nadella at an event in Dublin in October, 2016, Microsoft has “over 30 regions across all parts of the globe, making sure that there’s access to the cloud.” Now, it looks like the 34 that they do have might not be nearly enough to satisfy the needs of its corporate and individual clients.

Along with Amazon, IBM and Google, Microsoft has been investing heavily in datacenter capacity and new availability regions. All four companies expect tremendous growth in their respective cloud businesses, as can be seen by the elevated level of datacenter investments over the past several quarters.

The decision to cap Office 365 storage at 1TB could be an indication that Microsoft has already begun to feel the stress of cloud-based services on its infrastructure. It would be misleading to say that they’re reaching their peak capacity, however, but it’s clear that it’s something they’re thinking about, and possibly planning for.

We have to understand that Office 365 and Microsoft Azure have been growing at very healthy two- and three-digit rates for the past several quarters. Both these products need compute power as well as storage on a massive scale that is new, even to a software giant with deep pockets.


The second explanation is that it could indicate a bottleneck in their datacenter expansion plans, which include two new “Generally Available” regions in France and two Azure Government regions in the United States.

From a third perspective, it could just indicate a revision of their initial usage estimates when they rolled out the unlimited offer to Office 365 users about a year ago. Technically, that would be poor planning, but we could just as easily call it ‘timely intervention.’

We might not know exactly why the Redmond company is capping cloud storage allowances, but Microsoft appears to be the only cloud provider, so far, that’s fretting about all those extra terabytes of cloud space adding up.

AnyTrans for Cloud – Manage, Transfer, and Share Files Across Multi-clouds in One Place