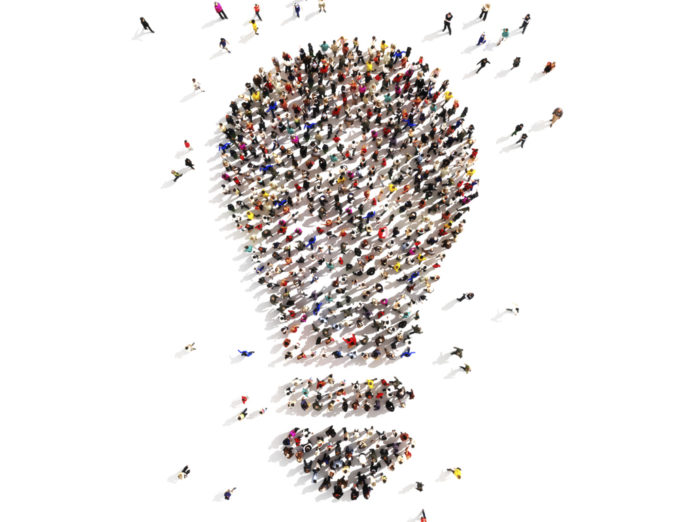 What is Swarm Intelligence?

In its most basic form, Swarm Intelligence, or SI, is the natural collective intelligence of multiple entities to form a “super-organism” whose intelligence is “amplified” through a natural system of real-time feedback loops.

Living organisms like bees, ants, birds and even slime-molds typically exhibit a natural form of swarm intelligence, but artificial systems can also be created to emulate the behavior of natural swarms.

From a practical viewpoint, it is far superior decision-making mechanism than static methods such as voting, polls, surveys and so on. The capturing of a collective decision, in the case of SI, is a dynamic and constantly evolving process, unlike traditional decision systems, where isolated data points are used to arrive at a consensus – or, at least, a majority.

And that’s where swarm intelligence differs from traditional voting and polling: the final decision is a conscious and deliberate consensus between the entities – rather than an aggregated collection of static inputs – to arrive at a final decision.

That decision could be a prediction, an opinion, an estimation or a judgement. Essentially, a decision arrived at in this manner would be the collective preference of the group, rather than a polarized outcome where different factions within the group either win or lose.

That’s an important distinction to make because our traditional voting and polling systems – and, for that matter, even educated assumptions by experts – often leave the minority in a discontented state of mind. That rarely happens when swarm intelligence is at work, if at all.

What is Unanimous AI and its Brand of Swarm Artificial Intelligence?

Unanimous AI was founded by Dr. Louis B. Rosenberg, entrepreneur, writer, professional filmmaker and prolific inventor with over 300 patents to his name. Dr. Rosenberg has several other accomplishments to his credit, including the development of Virtual Fixtures – the very first fully immersive augmented reality system ever built – at the US Air Force Armstrong Labs.

Dr. Rosenberg also founded Outland Research, a company that focused on advanced human-computer interaction. Outland Research was purchased by Google in 2011, along with its patents.

Unanimous AI was found in 2015 with the objective of developing Artificial Swarm Intelligence technologies that enable humans to leverage the power of the swarm.

Humans inherently “lack the subtle connections that other species use to establish tight feedback-loops among members,” such as the chemical traces used by ants or the ability of fish to detect vibrations in the water, or even the ability of the birds and the bees to form swarms and flocks that act together as one entity.

By using Unanimous AI’s UNU platform, human beings now have the opportunity to form a swarm and engage in what is called swarm artificial intelligence, or Swarm AI. The platform provides exactly the kind of real-time feedback system that humans lack, helping the group – now a swarm – achieve the kind of amplified intelligence that non-human creatures have evolved over millennia.

Individual participants in the “swarm” control magnets that move a “puck” between various outcomes (outcomes not shown in the gif image above.) These outcomes may be predictions, decisions, opinions or other similar forms of input.

The UNU platform also allows participants to chat online and interact while the puck is in motion. The result is a consensus on one particular decision or opinion that represents the best possible outcome that has everyone’s interest in mind.

In subsequent articles, we’ll get into the mechanisms of how UNU is able to achieve this, and where such systems can be deployed from a commercial as well as societal perspective.

To put it simply, heck yes! So far, the UNU platform has been used to predict various sporting and entertainment events more accurately than the experts could. More importantly, these collective predictions, opinions and decisions are far more accurate or creative than when the individuals in the swarm predict the outcome on their own. That’s the power of swarm artificial intelligence.

Now, while it’s great that the UNU platform can be used to predict the Oscars, the World Series or even the Presidential election, what are the use cases in which UNU and swarm AI can offer a tangible, impactful result?

I had the pleasure of speaking with Dr. Rosenberg on more than one occasion, and his focused approach to applying swarm intelligence in various areas industries and speciality areas drew me like a bee to its hive.

Over the next several weeks, I plan to cover different aspects of swarm intelligence, its various use case possibilities, and actual case studies, that will help us (me, included) better understand how swarm artificial intelligence can be leveraged in multiple areas of life, business, education, government and much, much more.

Stay tuned for the next article in this gripping series about human swarms and their power to effect positive change in the application of AI in business and in societal systems, thanks to Unanimous AI’s work in what can only be seen as an evolutionary leap in human decision systems.