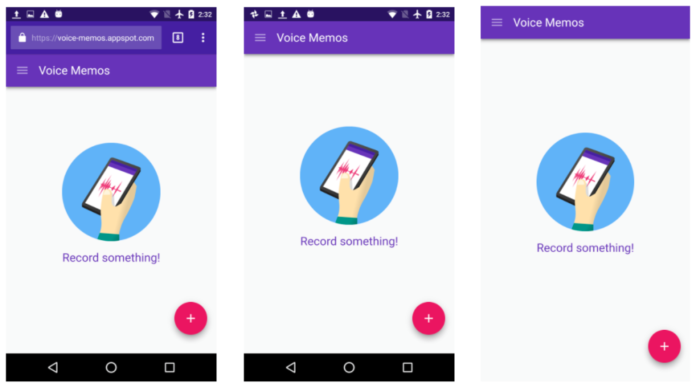 As Google Chrome 57 rolls out to Android users this week, all eyes are already on the next version, Google Chrome 58, which has just entered its beta testing phase. One of the biggest features is enhanced capability for progressive web apps, or PWAs. Chrome 58 beta also brings several tweaks to existing features, as well as more options for links on Custom Tabs.

Google’s focus on progressive web apps is deepening as it pushes hard to provide a mobile app-like experience for desktop users, and vice versa. The concept behind PWAs is that they are essentially web applications, but increasingly behave like native mobile apps on Android devices. For example, a PWA can access push notifications and even talk to your device’s hardware, just like an installed mobile app from Play Store. in addition, it lets you add shortcuts to your home screen and so on.

In actuality, PWAs are still browser-based web applications, but they will “live” on your mobile device in a sense, depending on an internet connection to work properly. Some offline functions may work, however.

With Google Chrome 58, Google has brought in the ability for PWAs to run in full-screen mode, which means the status bar and navigation bar will be hidden from view just like on a native Android app, coming into view when you swipe down from the top or swipe up from the bottom of the screen.

As for Custom Tabs, Google Chrome 58 beta brings them very close to what you’d see on a desktop browser, with the ability to open a link in Chrome or other browsers on your device. Right now, on Chrome 57, if you tap and hold a link, you’ll only see options to copy the link, copy the text or download from the link. In Google Chrome 58, you’ll be able to directly open the link in Chrome.

Minor changes on Chrome beta for version 58 include tweaks to the Bookmarks and History sections, and a removal of the older New Tab Page UI. Previously, it was possible to go back to the older design, but with Chrome 58 that will no longer be possible.

More changes are coming to Google Chrome 58, and the current beta version is 58.0.3029.33. You can download and install Google Chrome 58 beta on your Android device from Play store, which is currently on that version.

Quite a few exciting things are lined up for Google Chrome 58, the best of which (we feel) is the deep integration of progressive web apps with Android. It’s a significant move in the right direction because it brings the convenience of web apps to the mobile ecosystem without the need to install multiple apps and worry about internal storage space on your device.

That said, the number of PWA apps is quite limited at this point, but if it catches on, it could spawn a wave of PWA app development purely on the strength and expanse of both the Google Chrome and the Android device user base.

Note: If you’re a daredevil developer and you want to try out the version after Google Chrome 58, go ahead and install Chrome Canary, currently on version 59.0.3046.3 (version is device-dependent) on Play Store. But do so at your own risk, because that is an unstable version that even Google warns people about on the store.