Home Amazon One More Reason Why AWS is Tough for Microsoft and Google to...

Vision Mobile’s 12th Developer Economics Global Survey, which reached out to more than 21,200 developers across 160 countries, revealed many developer trends in the cloud segment, and how developers around the world are utilizing top cloud service providers such as Amazon Web Services, Microsoft Azure and Google Cloud Platform.

As expected, Amazon Web Services is the most popular cloud service provider, running away with medium to large enterprises segment, while holding a marginal lead with small companies with 1-5 employees. In that segment Amazon has a 15% share, with Microsoft holding 12% and Google holding an 11% share. 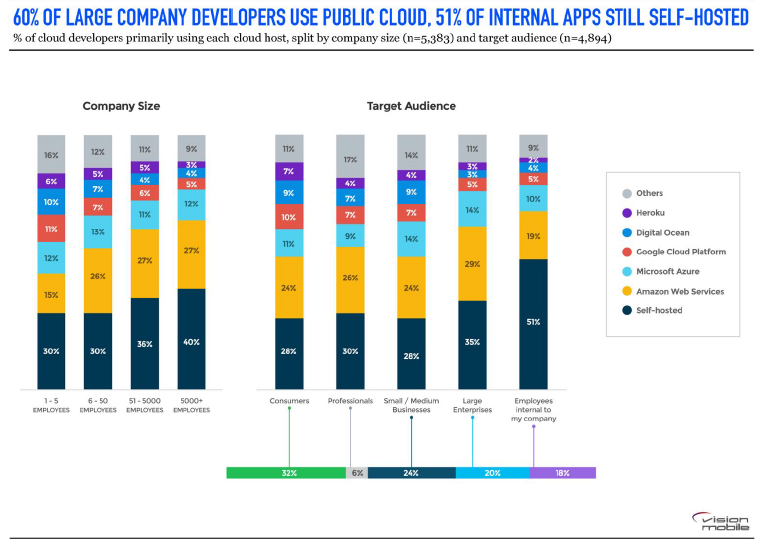 As you can see from the chart above, as the size of the company increases, the market share held by AWS increases. AWS is also the platform of choice irrespective of the type of audience developers are targeting. Google is running neck to neck with Microsoft with developers who create applications targeting consumers, but Microsoft runs away with developers who target large enterprises when compared to Google. However, Microsoft still lags behind AWS by a wide margin.

The most important takeaway from Vision Mobile’s report is that developers have started using cloud service providers to build applications for their customers, but when it comes to internal applications, they still prefer self-hosting.

“Developers building apps for their internal employees may only make up 18% of the market but 51% of them are still self-hosting and they skew towards larger companies.

Vision Mobile is absolutely spot on with its assessment that there is a huge market still waiting in the sidelines to be consumed by cloud service providers like Amazon, Microsoft and Google. Though companies across the world have started using the cloud, they still have not completely embraced it, especially when it comes to applications that they use internally.

One reason for this could be the fact that large organizations have already spent significant amounts of money toward their own infrastructure. Since most of the workloads have been slowly moving to the cloud, thereby freeing up existing infrastructure, these companies are making their investment work for them by self-hosting applications they develop for internal use.

It will take time for this segment to move to the cloud, but we see it happen slowly over the next several years. AWS is still very clearly in the lead, and with developers using it in large numbers, it will be very hard for its challengers to displace them from the top spot.