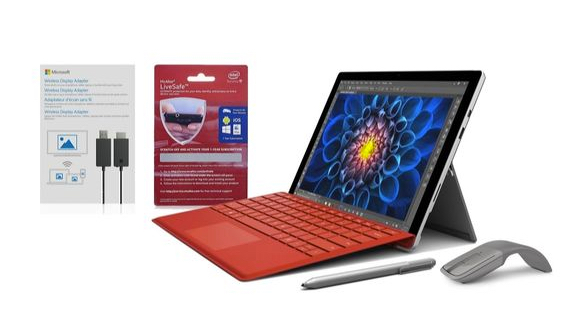 The 2017 Tablet Satisfaction Study from J.D. Power is officially out, and it shows some interesting trends around Microsoft’s Surface Pro range of hybrid 2-in-1 tablets. Not the least of these is that 51 percent of respondents said they felt they were the first among their friends and colleagues to try new technology products, like the Microsoft Surface Pro tablet.

That’s an important element in a new tech product’s lifecycle because that’s where fierce loyalty is often formed. When early technology adopters gravitate towards a product, it’s always a strong positive sign of acceptance in the market, especially when users are saying this after the product has been in the market for a significant amount of time. The Surface Pro 5 is yet to be released, but the Surface Pro brand has been around since February 2013, or four years ago.

The study reveals that Microsoft is well established at the top of the tablet market for its design and style, as well as from a features perspective. With an overall user satisfaction score of 855 out of 1000, Surface Pro tablets came shining through as versatile devices that act as capable laptops as well as highly functional tablets.

It has also been revealed that accessory use for Microsoft Surface Pro tablets is relatively higher than on any other device in this category. For example, the physical keyboard is used by 51 percent of respondents, as opposed to the industry average of only 14 percent. For the stylus the number is 48% against an industry-wide 27%. For the mouse, it’s 27% against a mere 6%.

But accessories are only one part of what makes Microsoft Surface Pro tablets extremely desirable. In terms of design, Surface Pro tablets shine in three key areas: size, quality and attractiveness. Users also give these products the highest rating for non-display button design.

By far the most important aspect is the demographic of these users. Surface Pro tablets appeal to a much higher percentage of younger customers, which is a key factor driving sales performance. We expect Surface Pro 5 to hold the same kind of appeal for younger buyers in the premium tablet segment.

Another, more obvious, aspect when assessing a tablet’s functionality is in the area of productivity. In the study, respondents showed the highest incidence of saying “very important” when it came to tasks related to productivity, such as browsing (90%), emailing (76%), word processing (63%) and online banking and mobile payments (53%.)

Apple Inc. definitely needs to take note of these statistics, especially in the face of declining iPad sales. Though Apple has made a conscious effort to stay away from the hybrid tablet market, they do support accessories like keyboards and touch pens.

The biggest disadvantage that Apple has is that iPads run on a mobile operating system: iOS. Microsoft Surface Pro tablets, on the other hand, sport Windows. Moreover, Surface Pro 5 will come with Windows 10 Creators Update – not something iOS can match up to in any significant way.

In summary, what the study shows is that Surface Pro 5 will get a rousing reception in the market, which is more than we can say for the second generation iPad Pro tablets. Admittedly, the iPad Pro lineup will have its share of market, but this time it might well be purely from a brand loyalty perspective, as well as compatibility with other Apple products that the user already owns.

Both product families will likely be launched in the second quarter of 2017, which means we won’t have to wait long before that assumption is validated.