Microsoft announced today that they have acquired Deis, an open source container platform that makes it easy to build and manage applications. Container technology has completely transformed the way developers around the world build, package, deliver and manage their applications.

Microsoft Azure already offers a container service that makes it easy to deploy container orchestration environments, called Docker Swarm. The container technology has evolved so much over the years, and Microsoft says that Docker’s cross platform support of Linux and Windows containers, along with Microsoft cloud technologies, can can support virtually every enterprise workload. 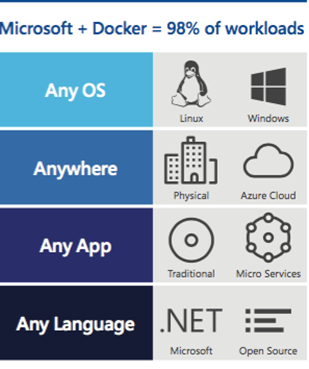 What is a Container?

“A container image is a lightweight, stand-alone, executable package of a piece of software that includes everything needed to run it: code, runtime, system tools, system libraries, settings. Available for both Linux and Windows based apps, containerized software will always run the same, regardless of the environment. Containers isolate software from its surroundings, for example differences between development and staging environments and help reduce conflicts between teams running different software on the same infrastructure.” – Docker

Put simply, containers make the developer’s job simple and easy, and that’s the reason that the technology found massive acceptance from the development community.

But if Microsoft Azure already has Docker Swarm then why buy a company that’s specialized in rival container technology Kubernetes? If you want to compare and contrast both the technologies you can read this article here.

Kubernetes is a open source platform that allows automatic deployment, scaling and management of containerized applications. Google designed it and has been a massive force behind the technology, helping its widespread adoption. Microsoft already had Docker Swarm, but Kubernetes has grown massively over the last few years.

“Data from OpenHub shows Apache Mesos dwindling since its initial release and Docker Swarm starting to slow. In terms of raw community contributions, Kubernetes is exploding, with 1,000-plus contributors and 34,000 commits — more than four times those of nearest rival Mesos.” – Infoworld

“From the early days of containers through the rise of Kubernetes, Deis has always been focused on building and contributing open source technologies that make life easy for developers and operators to build and run applications,” wrote Gabe Monroy, CTO of Deis in a blog post.

By buying Deis, which has expertise in building things around Kubernetes, Microsoft is making it easier for developers who are used to the increasingly popular Kubernetes. The day Microsoft embraced Linux, it was clear that the company was going to put the customer in the middle instead of forcing them to use a product of their choice.

Since that day, Microsoft has been more open to accepting open source platforms, and today, they have taken another step by allowing users to continue using a technology designed and promoted by their rival, Google. Good move for Microsoft Azure.