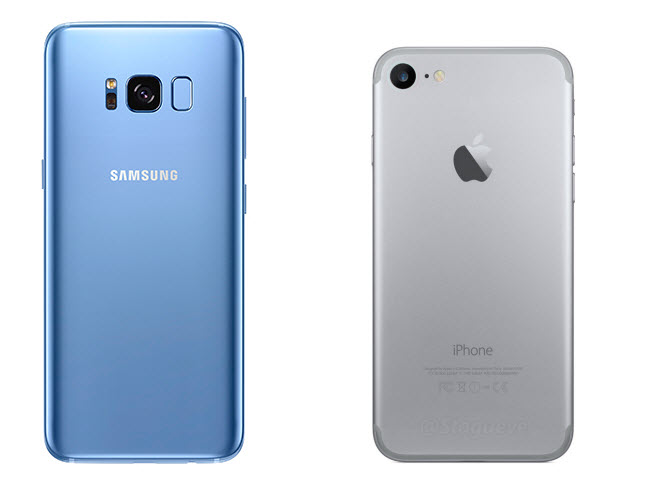 After Apple topped the December quarter in smartphone marketshare against Samsung with 20.3 percent over Samsung’s 18.5 percent, the South Korean electronics major is now in the lead for the March quarter, with 26.1 percent of production volume versus Apple’s 16.9 percent, according to TrendForce.

But before you assume that Galaxy S7 and S7 Edge edged past iPhone 7 sales, you should know that Samsung’s mid and low-end smartphones accounted for a major chunk of that lead, ably led by sales of the Samsung J Series of smartphones, helping Samsung become, as TrendForce put it, “the only brand that saw positive growth in production volume during the off season of the first quarter.”

The bad news for Apple comes in the production drop for iPhones, glaringly represented by a 41 percent YoY dip and 31 percent QoQ decline. TrendForce points out that the slightly lower QoQ decline is accounted for, in part, by strong sales of the recently launched iPhone 7 (PRODUCT)RED.

Apple’s production is expected to drop a further 17 percent sequentially during the June quarter, these two quarters typically being their off-peak periods. TrendForce also commented that players like Samsung may actually take a hit during the June quarter because of buyers holding off their purchases in anticipation of the much awaited iPhone 8 in September.

Both Apple and Samsung have a few more phones lined up for this year. Apple, of course, still has its primary flagship model, iPhone 8, as well as iPhone 7s and 7s Plus. Samsung has the Galaxy Note 8, real-life images of which were reportedly leaked this week, but the authenticity of which is questionable for several reasons. In addition, we may also see the Galaxy X and X1, which are rumored to sport a revolutionary foldable design.

In addition, Apple and Samsung will also have to contend with the Google Pixel 2 lineup from Alphabet during the final quarter, a key period for the entire smartphone market – and possibly Microsoft as well, with its Surface Phone.

Until the September quarter, the Apple-Samsung game of smartphone marketshare leap frog will continue, but the fourth quarter – the crucial holiday quarter – may tell a different story entirely.