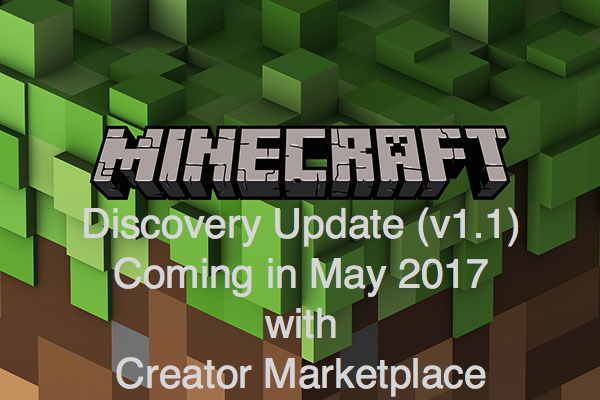 According to an article posted on Minecraft.net, Microsoft-owned Minecraft on Windows 10, Mobile and Android (beta) will soon be getting their own creator marketplace as part of the Discovery Update, or v1.1.

After the last major drop, the Ender Update (1.0) that was pushed on December 19, 2016 to all versions (except Windows 10 Mobile) – the one that incited (intentionally?) rumors of Minecraft’s end – there have been several updates to the Pocket Edition, the last one being 1.0.5 that came on March 28, 2017.

The Windows 10 and Mobile editions are now getting the Discovery Update as version 1.1, a major update that brings several new features, including llamas, shulkers, the forest mansion, the Enchantment of Frostwalking that lets you cross impassable rivers, the Enchantment of Mending to keep your swordblade ever-sharp and much more. The Discovery Update also brings more mellow elements for crafters, such as glazed terracotta and concrete blocks, the ability to smelt ingots and dye beds and more.

To take it a step further, Minecraft on these platforms is getting a new in-app marketplace where creators (just hand-picked ones for now) can hawk their wares in the form of skin packs, retextured overlays and entire worlds. Minecraft is limiting it to no more than nine specially selected creators for now, and they’re calling them Pioneer Partners, who will be allowed to list their creations alongside those of Mojang and Microsoft.

Time explains how players can buy these creations:

“To buy them, players (with Xbox Live Silver or Gold accounts) will have to spend a new in-game currency dubbed “Minecraft Coins,” reserved in exchange for real world money ($1.99 for 300, $4.99 for 840 or $9.99 for 1,720) and intended to be the de facto means of buying all things Minecraft going forward.”

The idea is to keep adding two to five Pioneer Partners a month so elements like content review and curation go in lockstep with new content created by these launch partners. For example, one of these Pioneers is a company called Blockworks, which creates masterpieces for Minecraft, such as Project Xephira, which is an ancient civilization at the bottom of the ocean consisting of no less than 33 million blocks. It took 15 builders several weeks to built it. Or Project Code-Red, made of 2 million blocks, representing a research facility on a martian landscape.

The new content can be folded into the game without the need to update the full game, says John Thornton, Executive Producer of Minecraft Realms. The platform will take a 30 percent cut of sales and will come with its own set of guidelines, similar to any app store.

But what are the criteria for selecting content? According to Thornton:

“Our goal is to make content that’s appropriate for our audience. We’re not necessarily critiquing the art style or choice of gameplay. That’s up to the creator. But what we will do is make sure it fits with our brand and within the marketplace itself.”

To assuage the fears of players and creators on the Java version, Minecraft says that it will not touch the original community. Players can continue to make content available for free, as before.

The Discovery Update should start to roll out sometime in May, and Android users will be getting a beta version that Minecraft is using for the purpose of testing. From what the article says, the beta version could be delayed beyond May.