Nintendo Switch has sold over 2.4 million units in the month of March 2017, showing that the 906,000 units sold in the United States is just a small part of Nintendo’s sales strategy. The information is from independent research group SuperData, which says that it is now revising its 2017 forecast for Nintendo Switch global sales from 5 million to 7.2 million.

Of course, the global data is not from Nintendo and may not be accurate, but if it’s anywhere close to the real figure, that bodes extremely well for the Japanese game maker’s newest gaming console. The company’s original estimate was 2-2.5 million units for March, so the data from SuperData matches that, as a result of which they’ve upped their full-year projections. 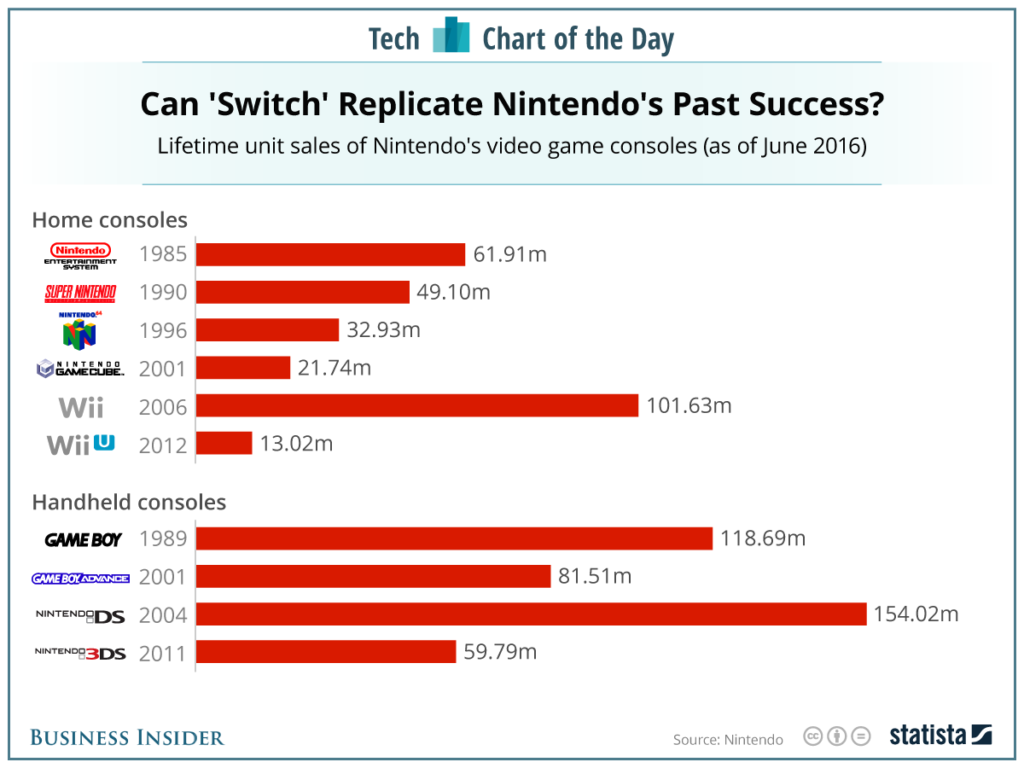 Nintendo, on the other hand, seems even more optimistic, and have already doubled their production estimate to 16 million units, which are their projected sales for the period running from April 2017 through March 2018.

The company also announced separately that The Legend of Zelda: Breath of the Wild had crossed 1 million copies sold to date. There are several highly anticipated games coming up this year as well, such as Mario Kart 8 Deluxe and Splatoon 2, that are going to be well-received. And Nintendo is also bringing in an “element of nostalgia”, says GameSpot, with titles like ToeJam and Earl: Back in the Groove.

More upcoming Nintendo Switch titles have been covered in an earlier report on 1redDrop.

Based on Nintendo’s ability to tightly control its production schedule, we could soon see supply reach out to meet the strong demand in the market for the Nintendo Switch. Earlier this week, the company decided to wind up its NES Classic Edition consoles, presumably in favor of being able to produce more Switch consoles to meet market demand.

Nintendo seems to have recaptured media attention with the Switch, effectively pushing out Xbox One and PS4 Pro to hog the limelight for itself. That shouldn’t last too long, though, not with Xbox Scorpio being aggressively and creatively promoted by Microsoft’s Xbox team. There’s still ample time for the Scorpio to get its fair share of media love, since it’s only coming out later this year.

That said, the 2017 holiday season is going to be tough on gamers, many of whom will have to choose between the more expensive Xbox Scorpio and PlayStation 4 Pro, or the more entertaining, versatile, cheaper and portable Nintendo Switch.

Thankfully, for the rest of us that don’t mind earlier models, we should be seeing some price drops prior to the Scorpio launch later in 2017.