Browsers are the gateways to the Internet. The browser world is a very small one, with only a handful of products for us to use, such as Google Chrome, Microsoft Edge and Internet Explorer, Apple Safari, Mozilla Firefox and few others.

Big companies don’t make any money from browsers, so why do they invest so much money, time and energy in building them? That’s because, as long as you and I – the consumers – use their product to enter the Internet, they have some level of control over the journey we take. And the closer they follow us while we’re online, the easier it is for them to get their other products and services in front of us.

Naturally, Google, Microsoft and Apple keep pushing each other to do better in the browser race. Let’s take a closer look at who is winning and who is losing out.

As you can see from the chart above, the whole desktop browser world was turned upside down due to the competition between Google Chrome and Internet Explorer. They were in sort of an inverse relationship: as IE kept losing market share, Google Chrome kept increasing it.

The reversal of fortunes for both these companies has been so phenomenal that Google Chrome now controls 42.47% of the desktop browser market, Internet Explorer has 12.47%, Microsoft Edge has 4.84%, Firefox has 7.57% and others have 29.38%. Google Chrome has not just won marketshare: it has two times more than the second-placed Microsoft.

The mobile browser market is a two-horse race that reflect the respective positioning of the two leading operating systems, Android and iOS. Apple and Google are in control of the smartphone market, and there is hardly any space left for other companies. 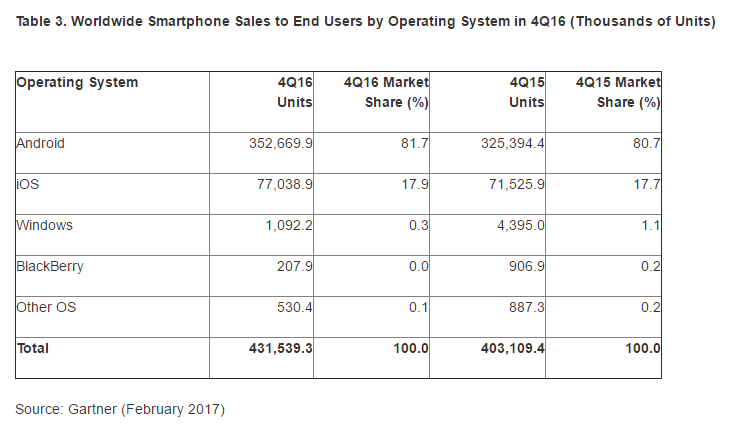 Apple’s iOS and Google’s Android accounted for 99.6% of the smartphones that were shipped during the fourth quarter of 2016, and both their browsers were naturally at the top of the mobile market.

Clearly, unlike the desktop world, where Windows is the OS mainstay but users prefer Google Chrome over the pre-installed Microsoft browsers, mobile users do have a preference for Apple’s and Google’s browsers.

The only thing we can assume from this is that consumers are more comfortable using the native browser when it comes to mobile. It would have been the same for desktops as well, had it not been for Google Chrome’s aggressive marketshare growth in the early days, which it is sustaining to this day.