Cloud computing has been the buzzword in the tech world for the last few years, and if new data from Synergy Research group is anything to go by, large-scale cloud computing companies are running away with the market.

Synergy’s data shows that hyperscale operators – who accounted for 47% of the cloud infrastructure market in 2012 – are now in control of 68% of the market. 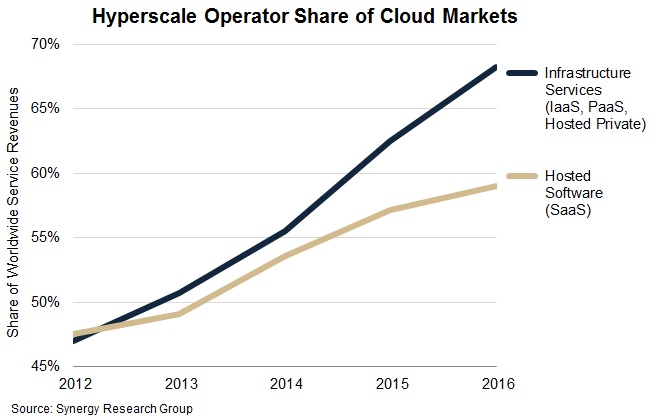 Synergy qualifies hyperscale operators as companies that typically have hundreds of thousands of servers in their datacenter networks. There were 24 companies that met its definition of hyperscale, offering services across the cloud spectrum that include Infrastructure as a Service, Platform as a Service and Private Hosted Services.

What’s even more interesting is that hyperscale operators are now in control of the SaaS market as well, controlling 59% of that segment. Unlike the cloud infrastructure market, where the number of players can be easily counted, the SaaS market, which should essentially include most of the software makers around the world, is huge. For every niche segment there will be several players in the market, but hyperscale operators or big cloud companies are now running away with this market as well.

Microsoft is a great example of this. Microsoft’s SaaS segment brings in a lot more revenue than its infrastructure cloud peer Azure. Google has also stepped up its game in the SaaS segment, while Amazon has shown a preference for addressing specific segments such as gaming, while also exploring its opportunities in the SaaS segment.

The dual and parallel growth of Iaas and SaaS marketshare for big cloud providers is a clear indication that big CSPs are now looking to build horizontally, with operations across the cloud spectrum covering IaaS and SaaS instead of just staying put in one single segment. Smaller players who operate in niche SaaS areas will still do just fine, but if they are building software that goes head to head with the top CSPs, then things are going to get a bit difficult for them a few years down the road.

Another development that could directly result from this is big CSP’s doing acquisitions to bolsters their SaaS offerings, the way Oracle did with Netsuite. Those kinds of large acquisitions could be rare, but a consolidation of niche SaaS companies could be in the offing.