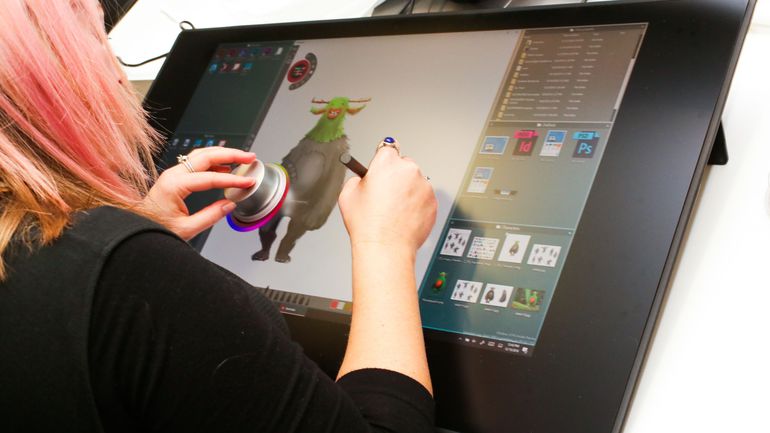 After weeks of zero news about the Dell Canvas 27 smart workspace that was supposed to launch on March 30, 2017, Dell has lifted the shroud of silence and announced that the award-winning horizontal touchscreen monitor has finally being launched at the National Association of Broadcasters 2017. Dell Canvas will be available in early July on Dell.com in the U.S. for $1799, according to a press release on Dell.com.

Alongside the Dell Canvas 27, the world’s No. 1 monitor brand will also be launching its first 4K HDR monitor that complies with the HDR10 standard. Also showcased at the event will be two UltraSharp monitors with InfinityEdge displays. The Dell Precision 5720 all-in-one PC, and VR creation notebooks and powerhouse towers will also be officially flagged off.

Targeting creative professionals, these monitors will offer full support for the 3D capabilities of Windows 10 Creators Update. The UltraSharp 27 4K HDR Monitor (UP2718Q) has a depth of 1.07 billion colors.

For some reason, the Dell Canvas 27 is being sidelined at the event. Dell only says this:

“Dell will be also be showcasing the Dell Canvas, an all-new smart workspace with touch, totem and pen capabilities that expands creative productivity for content developers and designers. Since its introduction earlier this year, leading partners and customers have been testing and delivering new application support for Canvas. Most recently, Adobe has developed totem functionality for intuitive timeline scrubbing in Premiere Pro for a Canvas environment. Dell is now expanding this early evaluation program to work with more partners and customers in preparation for global availability this summer.”

That does offer a clue as to why they’ve been holding off from launching the device. The testing and new application support is likely to have stretched their timeline beyond the original release date.

But even now, it appears that Dell still needs a couple of more months to push out inventory of Dell Canvas, which is why availability will only start in early July despite the fact that the National Association of Broadcasters 2017 is already underway, from April 22 to April 27, 2017.

This year’s lineup of products from Dell, some of which have already been launched and are currently available, are as follows:

New 2018 XPS 13 from Dell, a Little Controversial without the USB Type-A Port?

Dell Announces New Internet of Things (IoT) Division, to Spend $1B on R&D

Microsoft Again Pushes for Windows 10 Upgrades, Why You Should Listen This Time