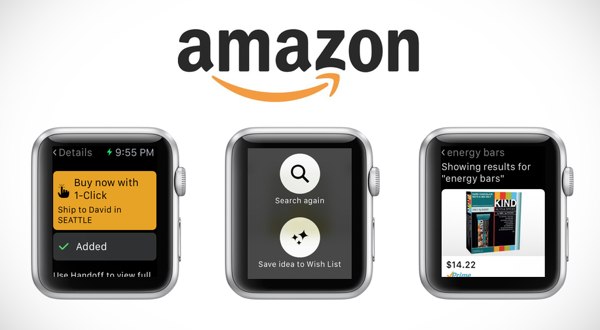 If you look at some of the world’s most popular apps on App Store, you’ll notice that many of them no longer support Apple Watch. Amazon, Google Maps and eBay are just a few of these. And, apparently, nobody noticed that support for Apple Watch has been gone for nearly two weeks!

Incidentally, these three apps from a tech major and two of the world’s most popular e-commerce platforms were among the first to support Apple Watch when it first launched in 2015. Now that they’re gone, the question of usage immediately comes to mind. There’s no reason for these companies to stop supporting a platform that actually did very well over the last holiday season, other than the fact that they weren’t being used at all, or the number of users was very minimal.

If you think about it, it does make sense that nobody with an Apple Watch would care to shop online on a tiny screen. But what about Google Maps? Surely, the step-by-step directions are useful enough. Apparently not.

Even top UK retailer Target has removed support for Apple Watch, which is kind of in line with the trend of retailers not finding any value in offering support.

Couldn’t they have just left it there?

The problem is, maintaining an app requires active input from developers, and developers aren’t cheap. If they have to keep updating the app for Apple Watch support every time it goes into a new version, that’s quite a few hours that could be put to better use elsewhere.

How expensive are app developers?

In the United States, a mobile app developer for iOS apps can command a salary in excess of $100,00 per year. iOS app developers in the US were paid an average of $105,000 in 2016, with Android developers commanding an even heftier average salary of $117,000.

The highest hourly rate for an app developer in North America is $168/hr for Android and $150/hr for iOS. Of course, you’ll get much lower rates if you go to freelance sites like Upwork or Freelancer.com, and you can hire globally for as little as $26/hour, but a lot of companies prefer to hire locally in the United States, pushing their cost up.

I’m not necessarily saying that Google, Amazon, eBay and Target are being cheapskates, but deploying developers is a question of prioritizing tasks, and support for Apple Watch (watchOS) is simply not a priority item on any developer’s list, or so it would seem.

That has to be the reason these companies are pulling out. One point to note is that Google issued a statement saying that the removal of Apple Watch support for the Google Maps app was temporary:

“We removed Apple Watch support from our latest iOS release but expect to support it again in the future.”

.@Google comment on @Apple Watch: “We removed Apple Watch support from our latest iOS release but expect to support it again in the future”

Well, at least not all’s lost.