Facebook growth has been stunning over the past several years. Not just the way its userbase around the world keeps growing year after year since the time it went live, but Facebook also proved to the world there is a way to make money in the social media world. But there are several signs that Facebook’s above average +50% growth rate may have to come down to more reasonable levels.

The first sign was from Facebook’s management itself, which sought to cool down the white-hot expectations of the investor community. Facebook’s CFO told investors that the time has come for Facebook growth to mirror its size.

“Over the past two years we have averaged about 50 percent revenue growth in advertising. Ad load has been one of the three primary factors fueling that growth. With a much smaller contribution from this factor going forward, we expect to see ad revenue growth rates come down meaningfully.” said FB CFO Dave Wehner during third quarter 2016 earnings call. 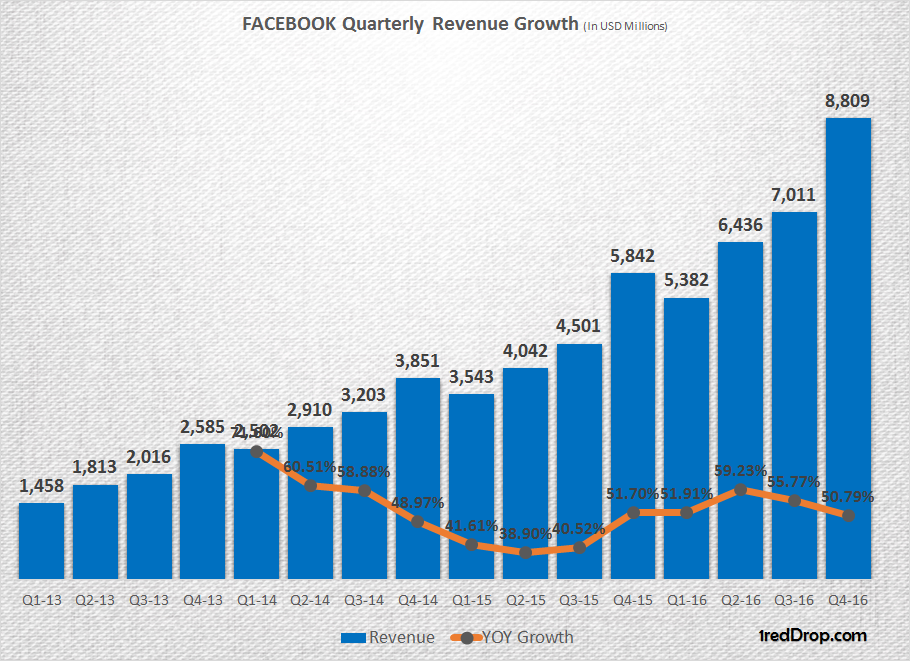 As you can see from the graph above, as Facebook kept adding billions of dollars to the top line quarter after quarter, they kept the revenue chart moving up by more than 50% in defiance of the size of that top line. This robust growth also came with its own side effect – rising investor expectations. At the time of writing this article, Facebook is trading at 14.27 times its sales. Compare that to Microsoft’s 6.15 times sales and Alphabet’s 6.91 times sales, and you can see how high the market sentiment has gotten with Facebook.

That’s one of the reasons he warned investors about Facebook growth. CFOs don’t like to see their company’s stock price do a nosedive, and Facebook is wide open for that if growth slows now. So, they did the right thing and told the world that growth may come down in the future.

It has to happen at some point, and not many outside of Facebook will really know when that exact time will be, but there are some visible signs that it may have already started to happen:

One of the biggest factors that influenced Facebook’s jaw-dropping revenue growth was its ever-expanding average revenue per user, or ARPU, as they call it. As ARPUs increased along with the total number of users, it provided the rocket fuel for revenue numbers to take flight.

But what are the odds of ARPU growing forever? Not that great, unfortunately. It will have a ceiling, or at the very least it will reach a stage of more stable growth instead of the current rapid pace. That’s because the amount of time an average user spends on Facebook cannot keep increasing indefinitely, and if the average time he spends has a ceiling, then the revenues Facebook can earn will also have a ceiling.

In fact, that’s what the company’s CFO was trying to convey. A user spending an ‘X’ amount of time spent on Facebook can only handle a ‘Y’ number of ads, called “ad load” – anything beyond that ruins the user experience and increases the likelihood of a drop off.

Facebook’s ARPU growth rate has been slowly coming down over the past few quarters, and we might be getting closer and closer to that point with each passing quarter, with Q2 2016 being their peak growth period. 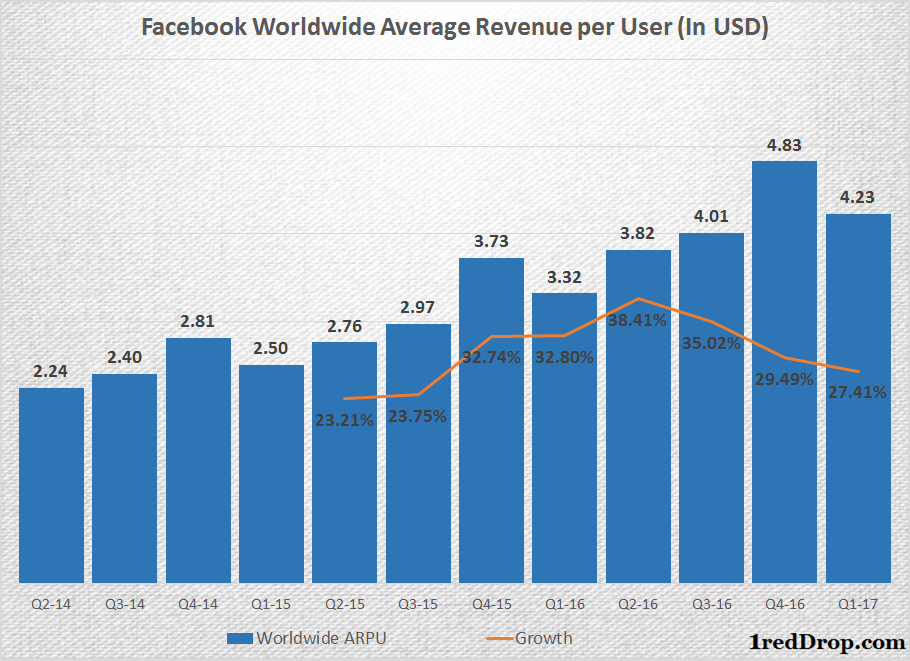 User base is still growing strong. The social media giant added 282 million users worldwide during the recent quarter, but if ARPU expansion slows down, the cumulative effect of ARPU growth + userbase expansion won’t be there, making way for reasonable growth numbers instead of jaw-dropping ones.