At least two separate reports suggest that the Amazon Echo with Touchscreen display could launch as early as today, May 9, 2017, and start shipping out to customers starting June 28. The device will cost $229.99 in the United States, £219.99 in the UK and €239.99 in Germany, but the European versions could have different launch and shipping dates.

According to an image received by AFTVNews, which also published the first leaked photo of the device, it appears to be called the Echo Show: 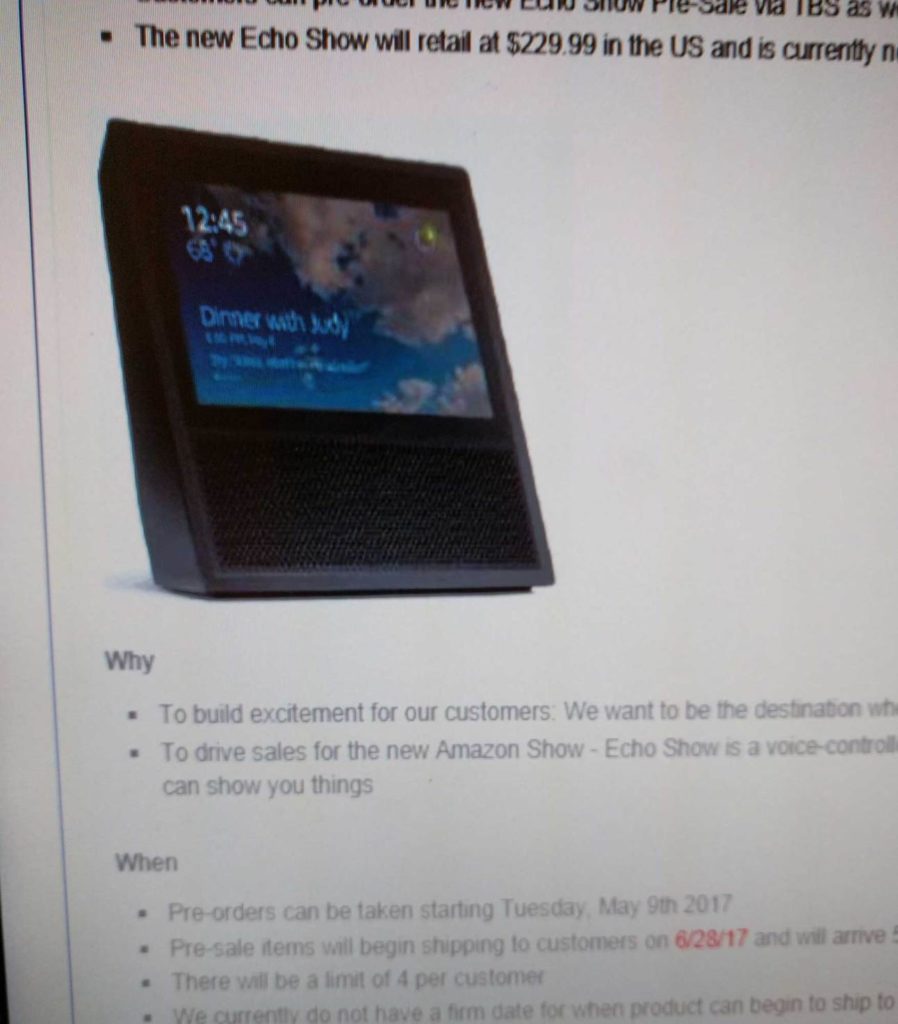 It looks like Amazon is gearing up for a staggered rollout, where shipping will be done in phases, gradually ramping up to full capacity. Judging by the popularity of the Amazon Echo, the Echo Show is very likely to garner huge demand on release. For now, Amazon is limited pre-orders to 4 units per customer.

One thing that bothers us is the fact that Amazon is launching this device at an unusual time. Amazon Echo sales are booming, and could obviously be cannibalized by the Echo Show. Also, an important product such as this is typically launched just ahead of the holiday season. What’s the strategy behind an early May launch?

One possibility is Apple’s Phil Schiller clueing us in on his company’s preference for a smart speaker with a screen. That could have put Amazon into overdrive to reveal the product at the earliest and gain sales traction before Apple makes its move. If Apple is, in fact, launching a Siri-enabled smart speaker with a touchscreen, Amazon cannot afford to give any room for the iPhone maker to swoop in on a market that has, until Google Home came along, been fully under Amazon’s control.

Even now, Amazon holds more than 70 percent of the smart speaker market, as reported earlier this week. But having Apple as a competitor is not a position any company would want to be in, even a stalwart like Amazon. Even if Apple only grabs a few tens of percentages of marketshare, that’s a huge bite out of Amazon’s device revenues.

Assuming the reports are true, we should see a formal press release from Amazon later in the day, along with a link to pre-order the Echo Show for June shipment. We will update this article accordingly.