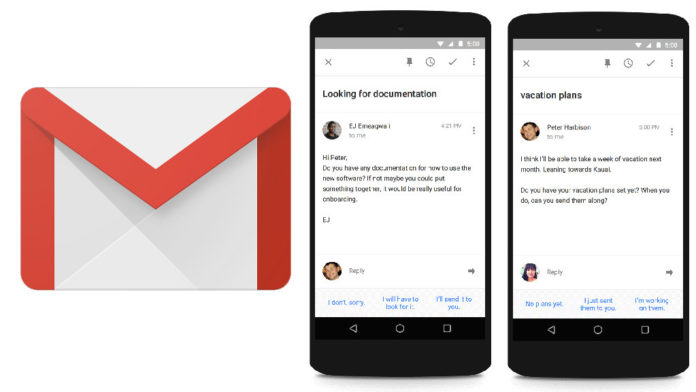 Artificial Intelligence is going to be a big part of Google’s future, according to CEO Sundar Pichai during his keynote address on Day 1 of the Google I/O 2017 developer conference. The company’s high-level commitment is to infuse AI into everything Google. One of the better examples of this is Smart Reply, a feature being developed for Gmail on smartphone operating systems like iOS and Android.

Using neural networks, Smart Reply will go through your email and craft an appropriate response based on several factors. Gmail’s new feature will draw upon the emails that you send, in order to build a response that sounds like it came from you, meaning it will keep evolving and getting better at it over time.

For example, if you generally say ‘thank you’ instead of just ‘thanks’, Gmail’s Smart Reply feature will take that into consideration.

All you need to do is pick from one of three responses that Smart Reply will generate, maybe do a minor edit or two, add some text if you want, and then Reply, Reply All or Forward your response.

The functionality itself is not new, having debuted in 2015 in Google’s Inbox app. Since then it’s made its way into Android Wear and Google Allo, the messaging app. This is the first time that Smart Reply is coming to Gmail for smartphones.

At this point, we’re assuming that Smart Reply’s capability is likely to be far ahead of what it was in 2015, when it could only generate a total of 20,000 possible responses. But gigantic leaps in AI in the past two years should ideally allow the new Gmail Smart Reply to generate even more, and make them contextual as well.

To learn more about the AI technologies used to build Smart Reply, you can visit their research blog.