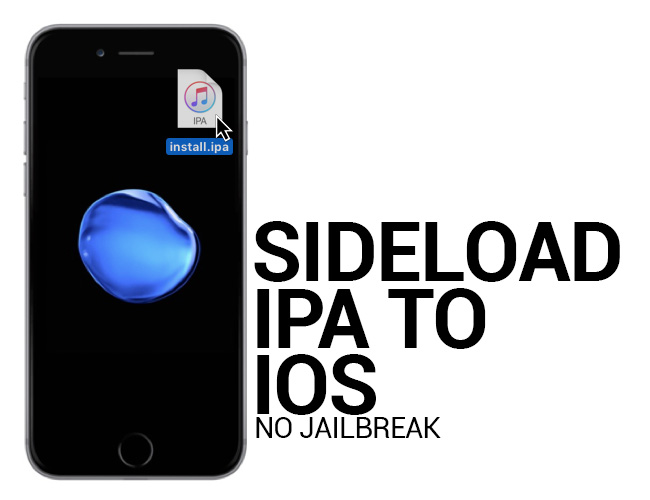 The elusive Pangu iOS 10.3.1 jailbreak may never come, but that’s no reason to stop getting tweaked apps on your iPhone running iOS 10.3.2 or earlier versions. Jailbreaking is essentially a hobbyist’s pursuit, at least for the folks that don’t build jailbreak tools. While a lot of people do like to tweak their phone’s basic settings, the bulk of jailbreak enthusiasts only do it so they can get awesome tweaked apps that they’d never see on the App Store.

So we suggest that you stop fretting about the lack of jailbreak activity of late, and switch to sideloading tweaked apps instead.

How is Sideloading Different from Jailbreaking?

Sideloading is essentially the same process as jailbreaking, but instead of installing a jailbroken version of the OS that doesn’t have the restrictions Apple puts on the stock version, what you’ll be doing is installing a tweaked iOS app on the stock OS itself.

That means there’s no need to jailbreak your iPhone for the sideloading process to work. But the best part is that there are several hundreds, if not more, of such tweaked apps already available from various trusted sources.

Admittedly, the rate at which tweaked apps are being released has slowed down along with jailbreak development activity, since a lot of them use Cydia to distribute their content, and Cydia itself requires the device to be jailbroken. Note, we’re talking about Cydia here, not Cydia Impactor, which is completely different.

The good news: you should still be able to find a tweaked version of most of the world’s most popular apps.

How Does Sideloading Work for iOS Devices?

The sideloading process is very simple: Download the IPA file, download Cydia Impactor and get the latest iTunes version on a PC. Then hook up your phone, run Impactor, drag and drop the IPA file and watch the installation happen within minutes on to your phone. It’s that simple.

Of course, there are a few extra steps required to make sure that the app works on your device, but that’s just “administrative work”, essentially.

In the past weeks we’ve covered the sideload process for quite a few tweaked apps and apps that are banned from App Store. You can take a look here:

We’ve covered how to sideload several other apps as well, including Pokemon Go, Kodi 17.1, iCleaner Pro and others.

View them all here

We’re saddened by the fact that Apple is putting The Big Squeeze on the jailbreaking community by recruiting the best security researchers and former jailbreakers for its own purpose. On the surface, it’s also sad that Team Pangu seems to have given over to its business needs rather than release the iOS 10.3.1 jailbreak that they obviously demoed last month.

But we also have to understand Apple’s need to secure their operating system, as well as Pangu’s need to operate as a company, rather than a group of wildcat hackers.

Security itself has come to the forefront of the technological world in recent years. The number of big hacks carried out on major companies can’t be counted on your fingers anymore.

For Apple, that’s a horrific scenario because they currently have over 1 billion active iOS devices around the world. That’s why they push so hard to get people to upgrade to the latest iOS version every time they release one.

And for Pangu, it’s an opportunity to operate a very lucrative business.

In our opinion, Apple is not against jailbreaking per se. It’s a harmless hobby, and it keeps a relatively large segment of the iPhone user base engaged, which is a good thing. But the vulnerabilities on which the exploits are build are certainly worrisome.

Case in point is the 2015 malware attack called KeyRaider, which impacted 225,000 jailbroken phones and stole iCloud login information from users.

Palo Alto Networks, a security firm that reported the breach, said this:

“KeyRaider has successfully stolen over 225,000 valid Apple accounts and thousands of certificates, private keys, and purchasing receipts. The malware uploads stolen data to its command and control (C2) server, which itself contains vulnerabilities that expose user information.”

That depends. If you’re sideloading a tweaked or banned app from a reputed developer or development team that’s been doing it for a while, you might be safe. The problem is, there are a lot of apps out there that carry malware, and could infect your device whether or not its jailbroken.

In fact, that’s one of the main reasons Apple doesn’t allow unapproved third-party apps on its iOS ecosystem. As a company, we already know that Apple values privacy and security above all else. And fighting the jailbreak community is merely an extension of that rather than an attempt to stifle creativity or prevent users from enjoying their iDevices to the fullest. Let’s not look at Apple’s attempts in a negative light, is our opinion.

That said, however, it’s much safer to sideload apps than to jailbreak your iPhone – as long as you’re getting your IPA files from the right source.

You might not get to do a lot of things that can be done on a properly jailbroken iPhone or iPad, but the choice of tweaked apps is definitely a big lure.

So let’s not worry about the Pangu iOS 10.3.1 jailbreak. It might never come, and we might never see another jailbreak release from this awesome team that has supported the jailbreaking community for the longest time.

Let’s get sideloading instead, because let’s admit it – super-cool apps are what the majority of us want after all, right?