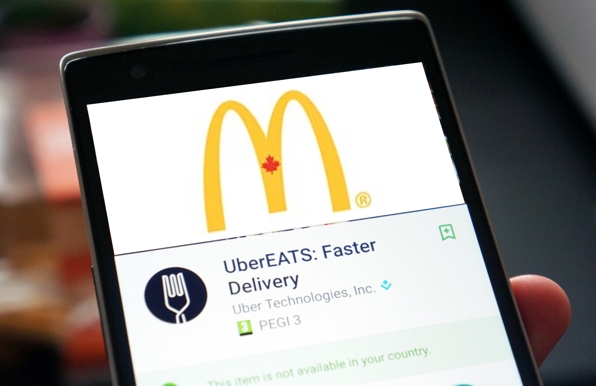 Earlier this week, McDonald’s expanded its McDelivery offering via UberEats to 970 restaurants across the United States, adding to its existing UberEats delivery network in multiple states. The McDelivery option via UberEats is currently available in LA (300 restaurants), Phoenix (144) and Columbus, Ohio (59).

In January 2017, McDonald’s also tested the UberEats McDelivery service in several cities across Florida and plans are afoot to roll out the service “to a number of U.S. cities this quarter,” according to McDonald’s VP Global Delivery, Bill Garrett.

“When we first started considering delivery, food quality was our top concern. But when you look at our real estate footprint, we are so close to so much of the population, delivery times are very tight. We’re getting great reviews (of the food).”

That’s the kind of national presence any retailer would give their right arm for, including the likes of Amazon, which has been trying to achieve the same kind of footprint by expanding its fulfillment centers across the country.

But what about peak times, when restaurants are typically jammed up with orders?

“Nick Karavites, a McDonald’s franchisee who operates 22 restaurants throughout the Chicago area, said the systems put in place behind the scenes ensure that orders stay organized and don’t sit too long. Much like curbside pickup, which McDonald’s plans to roll out later this year, Karavites said delivery orders won’t be made until an UberEats driver arrives, ensuring the food is fresh and hot.” – Chicago Tribune

The other major concern is the price. At $5 per delivery, the UberEats McDelivery service is more expensive than most of the items on a typical McDonald’s menu. But that doesn’t appear to be a problem, because the more popular orders are slightly larger ones, as the tests in Florida showed.

For example, one of the most popular orders was the 40- piece Chicken Nuggets, at $9.99. Equally popular is the Big Mac & Chicken Nuggets Meal Bundle at $14.99, which comprises two Big Macs, 20-piece Chicken McNuggets, 3 fries and 3 beverages, both medium.

McDonald’s believes that its McDelivery service is key to its plan for customer retention and win-backs. Other critical factors, it says, are mobile ordering, ordering kiosks and table service.