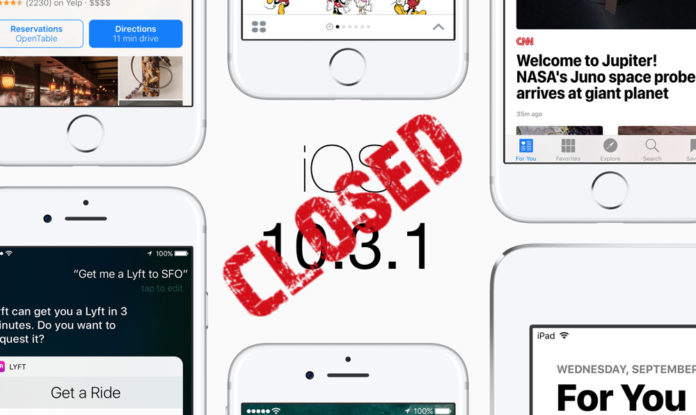 Three days ago, Apple shut the door to many iPhone and iPad users. With an iOS 10.3.1 jailbreak just around the corner, unless you saved your SHSH2 blobs for that version, you can no longer downgrade or upgrade to it. Almost a month after the public release of iOS 10.3.2, Apple has stopped signing iOS 10.3.1.

This time, Apple did an unusual thing: they waited a month before they stopped signing iOS 10.3.1. Generally speaking, Apple waits about a week after a new release to stop signing the previous iOS version. For example, when iOS 10.2.1 was released, a week later Apple stopped signing iOS 10.2. There are exceptions, but it’s quite rare for Apple to wait that long unless it’s a critical update and the migration to the new OS version isn’t as fast as they had hoped.

Fortunately, there’s still one ray of hope left – the iOS 10.3.2 jailbreak that KeenLab’s Liang Chen demoed at MOSEC 2017. Just in case that jailbreak does make it out to the public, which it might not, in all honesty, people currently on iOS 10.3.2 should stay on it. Or, at least, save your blobs before upgrading to iOS 10.3.3 or iOS 11 when it comes.

There’s also the iOS 11 jailbreak that was showcased alongside the one for iOS 10.3.2, but that was for the beta version of iOS 11. Apple’s own security team, or an independent security researcher that’s part of the bug bounty program, could find the vulnerability and patch it or report it.

For now, if you’re on iOS 10.3.1 and haven’t saved your blobs, DO NOT UPGRADE. If you do, there’s no chance of using a future jailbreak on that device.