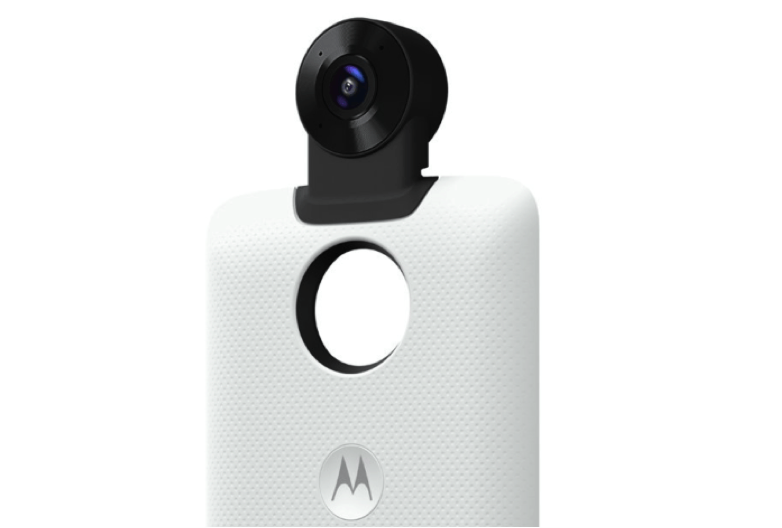 The smartphone industry is always on its toes to give something better for the next generation. Motorola has been working hard on its Moto Mods, pushing developers to release hardware that is backwards compatible with older Moto models. Motorola stated that it plans to release seven new Mods this year, of which four were launched alongside the Moto Z2 Play, the fifth being a new 360 camera that’s very similar to what Android co-creator Andy Rubin has planned for his Essential Phone PH-1.

The selection of Mods is beginning to look quite impressive.  These are designed to work with the Moto Z family, and the flagship that’s currently out.

Each Mod is attached behind the Moto Z series of smartphones using strong magnets. The Moto Mod with 360 camera uses the same modular case system, completely transforming your Moto Z into an entirely different-looking device with enhanced functionality.

This is a niche feature, and a nice addition to its Z series. The camera is part of a larger back shell that leverages magnets to hold the accessory in place. You can swap them easily and it fits perfectly and securely in a snap.

The Moto 360, unofficially called the 360 degree camera module, comes with two lenses and snaps onto the 16-pin magnetic array at the rear of all Moto Z handsets.

The 360 Moto Mod was showcased at a press event in Ghana, according to a report from TechDroider, though there is no mention about the specification, release date and cost. For now, it’s unclear if Motorola even plans to release the 360 Mod outside of Ghana; that might not be the case, especially since the Moto Z2 Play just hit Verizon stores in the US.