We’ve talked about how iOS 11 is going to make iPads more productive with its desktop-like features such as drag and drop, multi-tasking windows, the app dock and so on. It looks like Apple isn’t done making iOS 11 more enterprise-focused than any iOS in the past ten years.

In its third beta, iOS 11 brings document scanning to the Notes app, as highlighted during the keynote presentation for iOS 11 at Apple’s WWDC 2017 a few weeks ago. If you’ve already installed the third beta on your iPhone or iPad, you should be able to see “Scan Documents” in the Notes app’s menu. 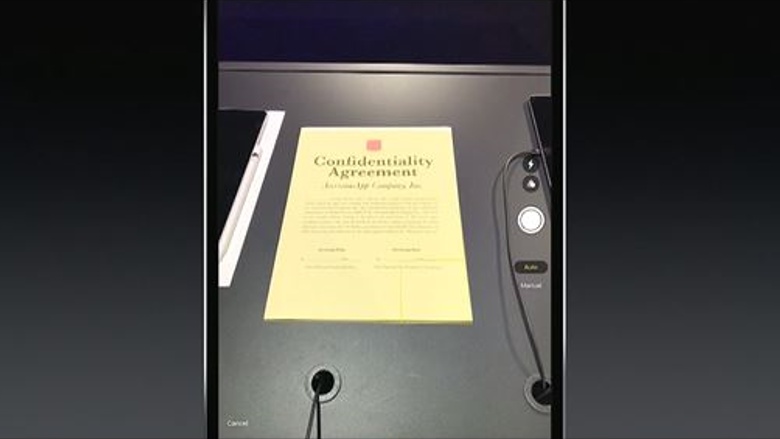 You can also add a sketch, add images from your photo library or take a new photo or video. But the document scanning feature is the most notable one because it eliminates the need to have a separate app for scanning, annotating or signing your digital files.

This particular feature works from various angles so there’s no need to hold your iPhone directly over the document you want to scan. Once it’s done you’ll see a thumbnail, and the scanner will remain on until your tap Save. That’s to allow you to scan multiple pages.

Once the scanned copy of the document is saved, you can sign it, highlight certain sections and even share it using the iOS 11 share sheet. In addition, you can convert the scanned file into a PDF using the Markup as PDF option.

So there you have it: yet another feature to entice business users to use iPhones and iPads as their enterprise device of choice. An iPhone or iPad might not be the most productive device to own, but with iOS 11 Apple is trying to bridge whatever gaps there are.

When iOS 11 is finally out, it is likely to be robust enough to allow the iPad to become as good as a regular laptop, but with touch functionality. And iPhone will get a bit of a boost as well, making it just a little bit more useful to business consumers.

That’s the direction Apple is apparently moving in, although its founder was rigidly averse to making anything specifically for business users.