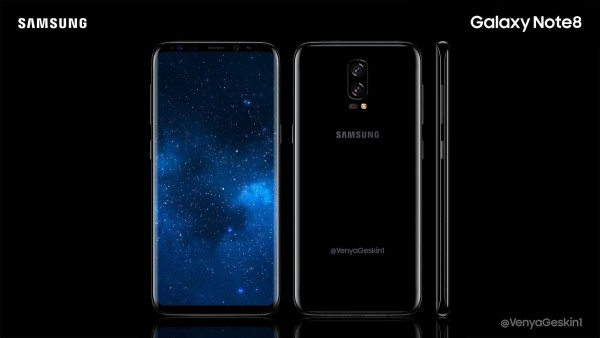 In light of iPhone 8 hogging up all media attention when it launches, Samsung has carefully strategized when it will be releasing its second flagship smartphone, the Galaxy Note 8. According to DJ Koh of Samsung Mobile, the device will be unveiled in “late August” and will be available in two waves: one in early September and the second starting October.

It’s very clear what Samsung is trying to do by scheduling the launch and the first wave of availability in this manner. iPhone 8 is due out in early September, and if all goes well on the production side, general availability might happen soon after. For that reason, Samsung is playing it safe.

For that reason, Samsung is playing it safe. If they launch the Note 8 too early, most smartphone buyers in the premium segment might take a quick look and then continue to wait for iPhone 8. If they launch much after iPhone 8, they’ll lose media traction and any hope of competing with Apple for smartphone sales during that quarter.

So, Samsung is playing it safe, which can be the only possible reason why they’re reserving a special batch of Galaxy Note 8 devices for delivery in early September, right at the time when iPhone 8 is unveiled to the world. The rest of us will have to wait until October.

As for a specific release date for the Galaxy Note 8, many have suggested that Samsung will hold an event on August 23, 2017. It’s reasonable to assume that this event will see the unboxing of Galaxy Note 8.

This year, the highest selling smartphone will depend on two things: looks and features. Pricing is rumored to be very similar – in the $1000 to $1200 range for both devices (and that’s only the starting price for the base variant.)

If Samsung can pull off the launch in a successful manner, they may well have the edge for at least the end of the third quarter, in terms of overall sales.