Home Microsoft Surface Phone: 25 Years in the Making, How Many Dead Mobile OSes... 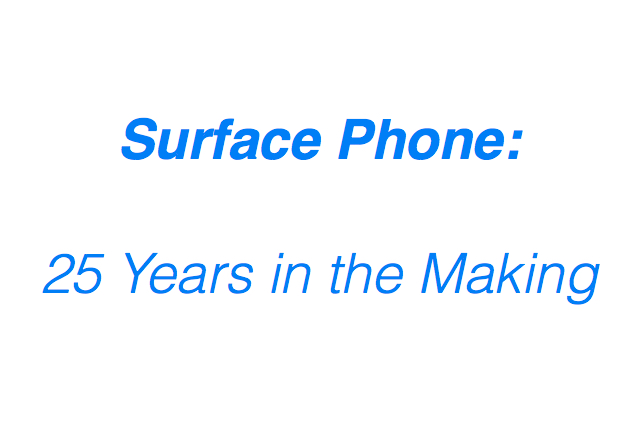 As Microsoft made the demise of Windows Phone official last week, it’s time to take stock of what went wrong, and all the things Microsoft will and must now do to ensure that none of those things are repeated with its much-touted (and much-doubted) Surface Phone release.

Here’s a quick look at the timeline of Microsoft’s many ventures into mobile computing:

How Does All of That Tie-in with Surface Phone?

So, if rumors are accurate about Surface Phone and Microsoft’s new version of Windows 10 Mobile, this won’t be the company’s second foray into smartphones. It will be the fifth or sixth attempt at cracking the smartphone market.

Microsoft has tremendous knowledge around how to fail in the smartphone world. Every mistake they’ve made so far strengthens their resolve to re-enter the space in a big way. Perhaps that’s why Microsoft CEO Satya Nadella is not going to release just another smartphone. That’s out of the question after twenty-five years of grappling with the mobile market.

The original objective was a handheld version of a desktop PC, essentially, and that’s what Surface Phone is all about. It is not a smartphone in the traditional sense of a mobile device with mobile-only applications downloaded from an app store; it is a cellular device, no doubt, but with all the processing capabilities of a full-fledged desktop PC.

And that’s why it’s taking so long because Microsoft wants to get it right this time. This is probably their last chance at this market. Android already exists on more than 8 out of 10 devices, and iOS pretty much has the other two in the bag.

If Microsoft wants to guarantee itself any measure of success, it must not only outperform iPhones, Galaxys and Pixels, but also top Play Store and App Store in terms of what types of applications it can run – not necessarily in terms of app count.

In effect, Microsoft has to create a device that can work as a smartphone, extend to a desktop and pretty much do everything a PC can do, but on a much smaller physical scale.

And that’s what the company is doing. By leveraging the UWP platform, the thousands of desktop applications developed for Windows over the decades, its strong presence in the enterprise and business user segment, the latest in cellular technology represented by its partnership with Qualcomm, its acquired know-how in hardware manufacturing and so on, Microsoft is crafting the mobile device of the future.

And that’s what we’ve come to know as Surface Phone.

When you look at it from the ‘bigger picture’ perspective, Surface Phone has actually been 25 years in the making. There’s no room for Microsoft to make mistakes this time around. It must hit the market hard and stun the likes of Apple, Samsung and Google.

Nothing less will do for Surface Phone.