Earlier this Wednesday, the FTC cleared Amazon’s proposed purchase of Whole Foods Market, a deal that is valued at $13.7 billion and is expected to be closed by the end of the year.

In a statement, Acting Director of the Federal Trade Commission’s Bureau of Competition, Bruce Hoffman, said that it “decided not to pursue this matter further,” referring to a possible anti-trust violation caused by the proposed acquisition.

Also earlier today, shareholders of Whole Foods also approved the deal, approval for which is not required from Amazon’s stakeholders.

One of the reasons that the acquisition will not affect the competitive nature of the U.S. grocery industry is that Whole Foods will only give Amazon a 2 percent market share in that segment, where Walmart holds 20% and Kroger has 7%.

But this does give Amazon tremendous leverage in a market that it has been trying to crack for the past ten years, with about as many initiatives. Amazon’s weakness, so far, has been the lack of physical presence across the country, which is critical in a segment like grocery. The acquisition of Whole Foods will give it a bank of over 450 strategic locations across Canada and the United states, but primarily concentrated – in the U.S. – in California, Texas and the Eastern Seaboard, the last of which alone has a population of 112.6 million, or more than a third of the entire population of the United States. 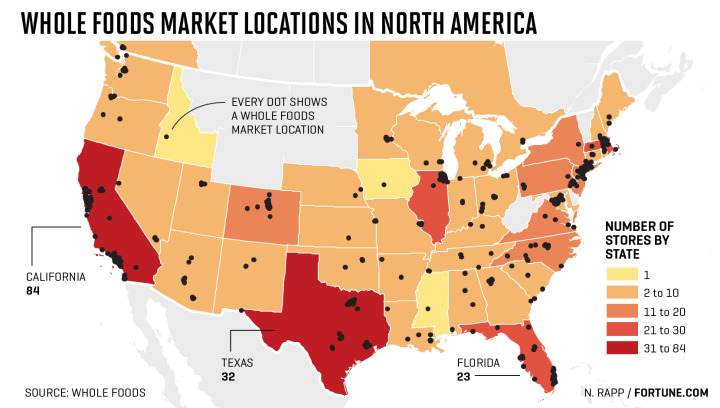 The acquisition of Whole Foods Market might look like a small step for Amazon into the world of physical grocery retail, but the yield is more than anything that any of its other initiatives have given it so far, and the potential to add to its existing footprint is significant. Amazon is not going to topple Walmart from its perch, but Whole Foods will give the online e-tail giant some fresh arsenal for its attack on the $800 billion U.S. grocery market.