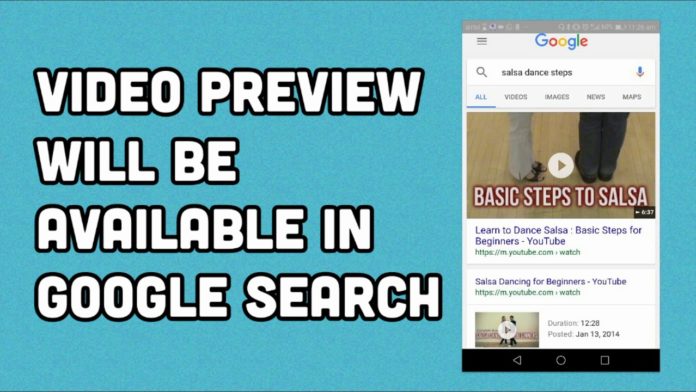 During your search – on mobile apps, exclusively – Google will let you watch a silent six-second clip of a possible video match for you to choose, or if you want to continue the video search.

To be more precise, earlier, if you were looking for a video on Google’s mobile search app, a video search would show several results in the form of thumbnails, along with the titles. You had to play each one of them until you found the video you were looking for. The new video preview feature, which is self-explanatory, makes it easy by playing the most relevant six-second video for you to decide.

The interesting part is the use of AI capability, which decides which six seconds of a longer video is shown on the preview.

As of now, the feature only works for English, but the company has plans to eventually roll it out globally as and when new languages are supported.

For sure, Google-owned YouTube is part of this new video preview feature, and these little clippings will be available from other video hosts as well. It was first launched on Android, on both the Chrome and Google apps. The company will expand the video preview feature to iOS in the near future.

As mentioned, machine learning makes sure that the right six seconds are used for the preview. Sources say it works quite well, but little is known about the algorithms behind the functionality.

Of note is the fact that previewing videos this way takes up a lot of data, which isn’t a good thing if you are connected to a mobile network. If you decide to use the feature, it would be best to use Wi-Fi. Though it is only six seconds, it takes you through a huge amount video content before you know it. If you want, you can turn off the entire function in Settings.

On the plus side, the video previews feature will help you find relevant videos faster, and it follows the general search format that Google uses by putting the videos up as Snippets.

While the new video search feature sounds great, it is still unclear if the data consumption issue will be annoying to users, considering those pesky auto-playing ads and the sheer volume of video content on the Internet.