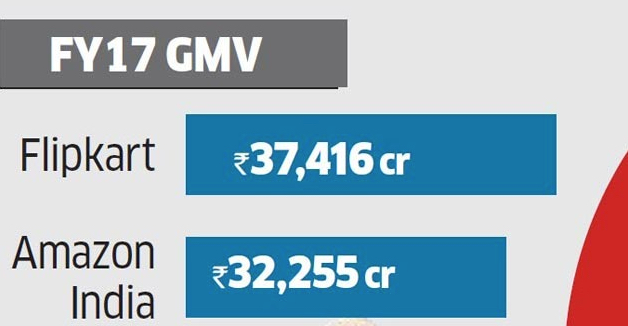 Is it a coincidence that Amazon’s Great Indian Sale just happened to be on the same days that its rival Flipkart announced its Big Billion Days sale? Hardly. And neither is it a coincidence that both deep-discount events opened up right before what is possibly India’s biggest shopping season – the festival of Diwali.

As Amazon and Flipkart, the top two e-commerce giants in the Indian subcontinent, battle it out for market share in the world’s largest democracy, each has billions of dollars to help it inundate the market with their respective inventories.

Amazon and Flipkart both use similar self-fulfillment models, which seems to be the ideal modus operandi. Why ideal? Because it has already pushed all the other e-commerce players to the sidelines as the top two grab huge chunks of market share left, right and center.

But the e-commerce war in India – and, Indeed, elsewhere – is not about patiently waiting for the enemy to make a mistake. It’s about not allowing an inch of space for the other to take advantage of. That’s why Amazon prepared itself well in advance to meet Flipkart’s online discount event head-on.

The Timing is Right for E-commerce Discounts and Deals

This is possibly the most lucrative time of year for most retailers in the country. Diwali is the one time where Indians spend recklessly whether or not they have the money for it. In fact, according to Investopedia, the number of new loans starts increasing around October 1 and goes right through to the end of the calendar year, after which it drops to its seasonal lows in January and February, once again picking up in March, or the end of the Indian financial year.

Indians tend to spend a tremendous amount of money during festivals, and the latter half of the year is chock-full of such auspicious events.

According to an Indian industry chamber Assocham survey, Indian consumer demand saw a 40% year-over-year increase during the festival season in 2016. And that’s not a one-off occurrence. That strong growth is sustainable considering the healthy state of India’s economy. The country’s GDP growth rate in 2016 was 7.1%, not as great as the 10.2% achieved in 2010, but that’s still a lot healthier than the Middle East and North Africa’s 3.3% and East Asia and Pacific’s 4.1%.

Incidentally, post-2010 was also the period when India entered the e-commerce game in a big way.

This fast-growing economy is very likely going to stick around for a while, and the e-commerce industry is going to benefit from it. According to estimates from Forrester Research:

How does India tie into that? Forrester also says this (emphasis ours):

From that perspective, a 40% annual increase in consumer spending during the festival season is not unreasonable at all. If online shopping via mobile is going to see a 15%+ CAGR over the next several years, then web purchases can be expected to match or exceed that growth rate during the same period.

And India is sitting right on top of the growth that is expected to hit Asian e-commerce over the next half decade, at least.

That’s why Flipkart and Amazon are all over each other. Amazon’s $5 billion outlay for its India operations, and Flipkart’s recent $3 billion round of funding that saw Microsoft, SoftBank and Tencent Holdings flip their coins into Flipkart’s coffers, was nothing more than further evidence of the market’s growth potential.

Amazon’s warehouse (fulfillment center) capacity in India already exceeds 13 million cubic feet, and the retailer currently offers over 160 million products in the Indian market. Both those numbers are growing fast, and will continue to grow as Amazon embeds itself deeper and deeper into the Indian consumer economy.

For now, India has become a two-horse race as far as e-commerce is concerned. Amazon and Flipkart are playing leapfrog with the Number One position, with Flipkart recently taking back the crown in March 2017 from Amazon with a jump to 57% market share, according to one of Flipkart’s biggest investors, Naspers.

Meanwhile, other major players like Snapdeal, Jabong (Flipkart-owned), PayTM (Alibaba-backed) and others continue to do relatively well in their niche segments.

Interestingly, acquisition talks between Flipkart and SnapDeal, the third largest e-commerce company in India, which were announced in July this year, broke down, with the latter wanting to pursue an “independent path” in the market.

So, we now have three strong players vying for the majority of market share, and a bunch of others left fighting for whatever’s left. And this is the current market share scenario in India e-commerce: Flipkart is currently at the top, with Amazon just waiting to grab the top spot again. SnapDeal has decided to take its own “independent path”, but it has to fight to keep from losing third place. The others share the rest of the available market.

Fortunately for all these companies, that market is showing strong signs of sustained growth with no plateau in sight, at least for the foreseeable future.

But is that the reality? Let’s look at it from another perspective.

Estimates show (see below) that e-commerce growth rate will eventually slow down to about 22% by 2020, but is currently at between 45% and 55%. 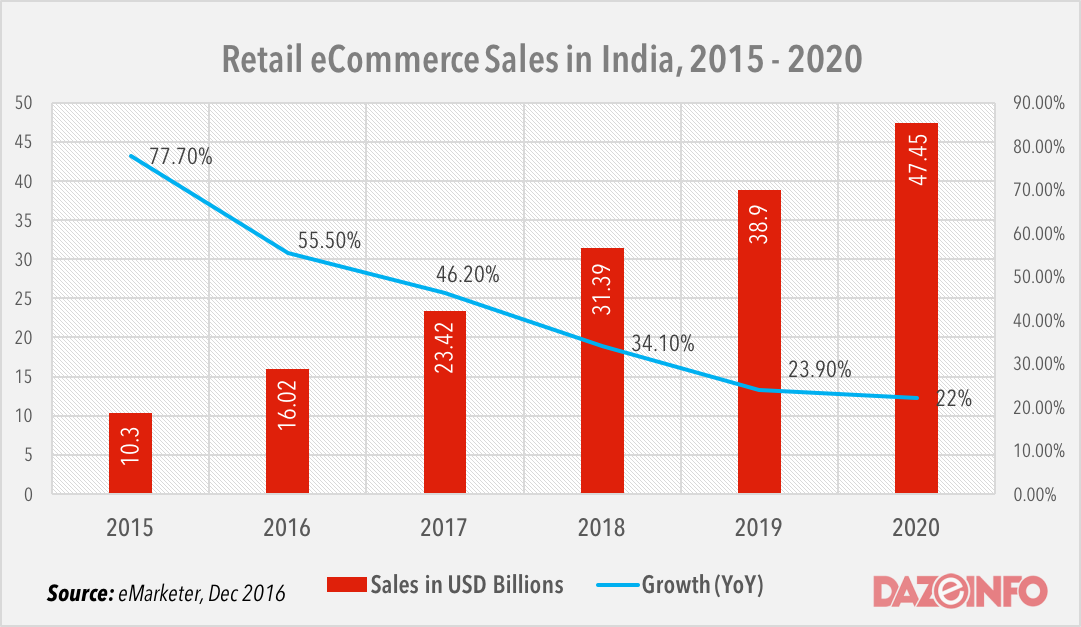 Amazon India, on the other hand is growing at around 125% year-over-year. That might not be sustainable in the long run, so let’s use the most recent figures: 88% in Q1 2017 and 85% in Q2-2017. The festive season is just getting started, so we should see better numbers for Q3 and Q4.

Taking the low-end of quarterly growth, which is 85%, Amazon’s revenues are likely to expand from the current $351 million to about $4.1 billion by 2020, representing less than 10% of overall retail e-commerce market share in India. On the other hand, if we use their 125% growth level, it would put 2020 revenues at around $9 billion, or about 20% market share.

Neither company reveals specific numbers of units shipped or GMV, so we have to depend on third-party data.

Moreover, just today, right after the recently concluded Big Billion Days shopping festival, Flipkart claimed that it grabbed 70% market share of the overall Indian e-commerce volume during the period. This information is directly from one of Flipkart’s senior directors, Smrithi Ravichandran:

“During this BBD, Flipkart did sales which equals 70 percent of the entire online e-commerce market in India. We created history by growing sales by 100 percent this BBD versus last year.”

Amazon was quick to respond with a statement of its own, saying that Flipkart’s claim was based on “poorly informed and speculative reports.”

“Amazon.in remains the largest marketplace and the fastest growing one in Indian e-commerce landscape”

Amazon, in turn, claimed that half of the item categories in its India catalog doubled their sales since last year’s Diwali shopping event. It also revealed that Prime was its fastest-growing product, showing a four-fold jump from last year.

So, that could mean one of two things: either industry projections are way off, or we could see this stellar growth drop down to much lower levels much sooner than expected.

In summary, we have the top two e-commerce players growing at around the 100% level year-over-year. With industry average between 2016 and 2020 ranging from 55% down to 22%, it’s clear that the growth of these two companies is far above average.

That also means that this kind of growth could be short-lived. Revenue growth for both companies appears to be coming from more purchases rather than more customers. Real long-term growth can only come from increased smartphone penetration and increased Internet availability. And that’s not going to happen overnight.

What’s more likely to happen is that this seemingly unsustainable growth will eventually settle down to more realistic levels that are closer to the industry average. By then, both companies will be well-established players in the Indian e-commerce scene, with significant and comparable market shares. If that ‘settling down’ doesn’t happen by 2020, the experts will have to revise their future estimates by a large quantum.

What About Profitability for Amazon India and Flipkart?

But will they eventually be profitable? That’s the big question no one can answer at this point. The only things both companies are chasing right now are volume and growth. Once growth slows down, that’s when investors will look for efficiency, profitability and all of that.

So I would like to personally thank Jeff Bezos and the Bansal brothers for making my life that much better. Thanks, guys, but I gotta run – I think there’s an Amazon delivery guy at the door. Or maybe Flipkart.