Netflix (NFLX) has increased its prices in the United States. Yes, the unthinkable has happened. With competition from Amazon, HBO and Hulu nipping at its heels, not to forget a budding Apple Music and YouTube Red, conventional wisdom in the Age of Amazon would be: go low (on price) to go high (on user base growth). But Netflix, the number one premium streaming video content provider, is going in the opposite direction. Why, and how could it affect further subscriber growth in the United States?

Netflix’ standard service now costs $10.99 monthly, an increase of $1.00, while the premium service now costs $13.99, an increase of $2.00. The price increase is not for existing customers: after all, they don’t want to trigger a slowdown in their subscription growth and happily hand over customers into the waiting hands of the competition. But the increase will eventually hit its present user base, as noted below.

According to a Netflix spokesperson, users will be notified of the new prices based on their billing cycle and will get 30 days notice before the changes takes effect. Netflix will begin notifying members of the change on October 19. The price increase for new customers in the U.S. became effective on Thursday. – CNN

It is indeed a risky move, but one that also gives us a clear view into how Netflix is looking at its home market. The competition in the streaming video on demand (SVOD) market is red hot in the United States. One by one, major tech players – read Apple, Facebook and Google – have jumped into the space, and all three companies have announced their plans to produce original content as well. 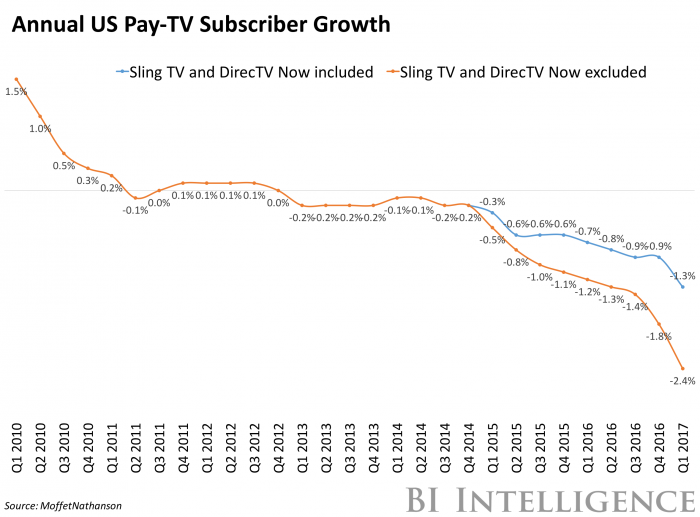 As you can see from the graph above, customers are not that happy with their cable TV subscriptions, and the “cord-cutting” has accelerated in the last two years. But a large portion of this consumer base already has streaming video subscriptions. Besides, how many more customers can Netflix add in a country with 125 million households and 94 million broadband users, when it’s already covered such a large swathe?

The high levels of penetration and the greater number of deep-pocketed competitors are only going to make new subscriber additions that much harder for Netflix, and its only going to get worse with each passing year. 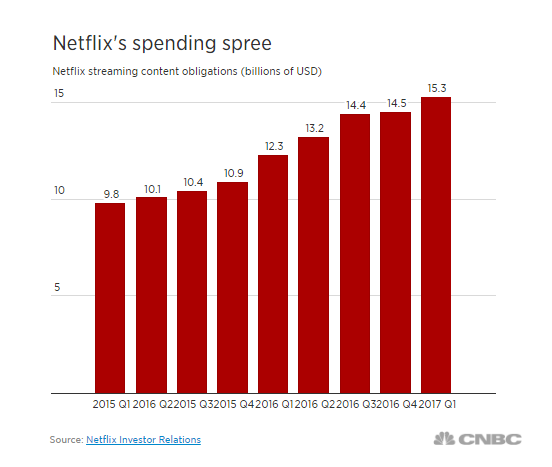 Netflix is now trying to swing the other way and make as much money as possible from existing users, while simultaneously ploughing as much money as it can into original programming to make its content stand out from the competition’s. And they want to do all of that before their budding competitors can get their acts together.

This does push Netflix further into the top-end of the streaming video segment, a bit further ahead than its already-premium positioning. But Netflix thinks its better to stay at the top and stand out of from crowd in order to hold on to its 50+ million customer base in the U.S., even if that means a slowdown in new subscriber acquisition in that market.

It’s a difficult choice, but Netflix has firmly made the decision. Let’s watch and see how users react to the change.