As the United States’ retail wars rage on, every company is already in the “do whatever it takes” mode, slashing prices, enhancing delivery methods, simplifying returns processes, increasing stock keeping units and so on. But what goes on in the background? For example, how do they move the goods, how efficient are the procurement and shipping processes, and how does technology connect all those dots? Those are all equally important.

What goes on in the background always gets lost in the noise created by key metrics that companies report every quarter. But, more often than not, that is what makes all the difference. In a market where volume matters the most, even half a percentage point margin can make a world of difference. This is the area where Amazon has always excelled, constantly trying to find that extra point that can make a difference.

Once Amazon won the e-commerce game, or at least managed to take a monumental lead in the segment, it turned its eyes towards things that it can do to save that extra dollar. Warehousing is one area that they have always tried to improve. As the company got bigger and bigger, they kept constantly trying to not just reduce the time taken to deliver the goods, but also reduce the costs associated with delivering them.

Crucial to that objective is their fulfillment center network, and that network is growing like a spider’s web around the country, slowly but steadily expanding Amazon’s reach. 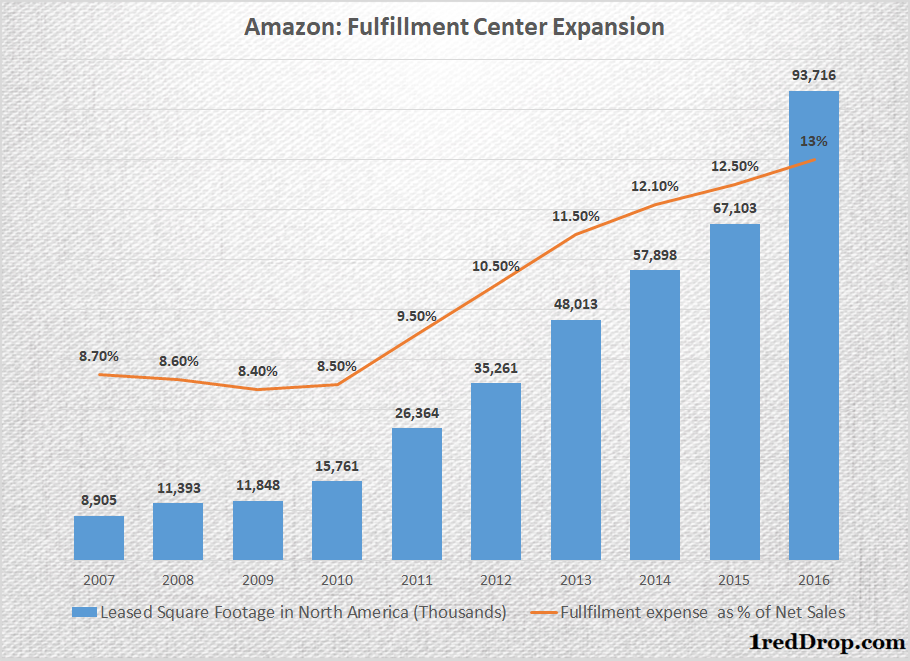 Under normal circumstances, the expansion of Amazon’s fulfillment capacity should have helped the company save a lot of money. But this is not a normal company. As Amazon’s scale increased on the fulfillment side, their costs increased as well. From accounting for around 8% of sales in 2007, fulfillment-related expenses now account for a whopping 13% of net revenues. Clearly, costs increased much faster than the company’s ever-expanding revenues.

But you can’t blame Amazon for this because the company kept reducing shipping times and increased its Prime members by the truck load during that time. It works this way: the faster you try to ship the products, the greater your stock has to be, and the quicker they need to move in and out of your fulfillment centers. And that, of course increase the costs.

So, is it bad news for Amazon that their fulfillment expenses are rising faster than their revenues. Not really. Amazon wants to ship as quickly as it possibly can to its customers, and it is ready to swallow the extra costs associated with that enhanced customer experience. The increased scale has not brought cost efficiency to the table, but it has increased the quality of service. However, there will be a point were service quality ceases to expand, and that’s when the scale of its network, and its capacity, will make a huge difference. That’s the point Amazon is trying to keep inching towards on their goal to become the most customer-centric company in the world.