The global PC market is on a record-breaking spree, but in the worst way possible. Shipments have now declined for 12 quarters in a row and, with that, we are well on our way to making this the 6th consecutive year of sales declines. The US market fared even worse, declining by 10% during the third quarter of 2017 compared to the same period last year.

No one thought that the PC glut would continue for this long, and no one now knows how long this is going to continue. 14.7 million units were sold in the US market during the third quarter, and global sales stood at 67 million. At first glance, 67 million unit sales looks reasonable, but only until you look at the 88.95 million units that were sold during the third quarter of 2010, two years after the revolutionary iPhone was launched by Steve Jobs.

Between the third quarter of 2010 and 2017, PC sales have shrunk by nearly 22 million units, and there is a very good chance the decline will continue further.

Gartner noted that US PC shipments declined for this reason: “Weak back-to-school sales were further evidence that traditional consumer PC demand drivers for PCs are no longer effective,” Ms. Kitagawa said. “Business PC demand is stable in the U.S., but demand could slow down among SMBs due to PC price increases due to component shortages.”

Why Will the Decline Continue?

For starters, for any decline to stop we need to see some sort of uptick or a period of stable sales. But nothing of that kind has happened. PC sales have declined for five years in a row and we are well into the sixth. To top that off, there was not a single quarter of positive growth in the last three years. 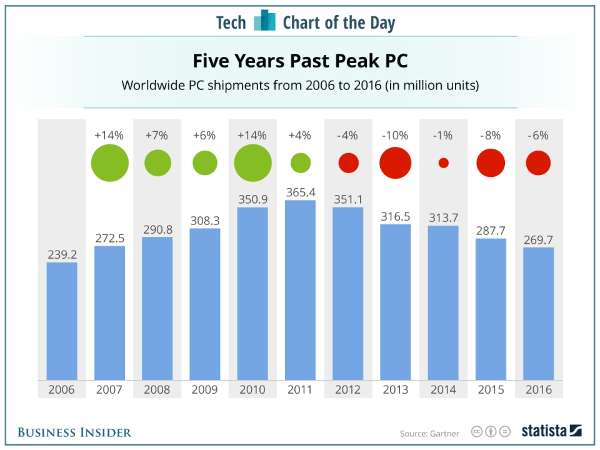 As people around the world keep buying smartphones and tablets, the need for PCs is steadily shrinking. There is not much of a chance for any reversal in those trends. Hardware makers are increasingly pushing newer innovative products, like Amazon’s Echo, and concentrating on finding the next smart device that can get us connected to the world. The odds are loaded in favor of a non-PC world, and the relegation of PCs as a business device.