In a report yesterday, we revealed how Israeli officials caught agents from Russia spying on US intelligence programs and their code names using the globally popular antivirus program from Kaspersky Lab. In that piece, we also questioned the psyche of the American public, which tends to over react to what’s going on around them.

Today, we’ll look deeper into how this phenomenon affects public life, general opinion and the fear levels of the American public.

Spies spying on spies spying on spies is nothing new. Espionage is as old as civilization itself, and the basis of that is curiosity and a need to be more well-informed than the “enemy.” Even the bible speaks about Joshua and Caleb sending spies into the Promised Land. Chinese military strategist Sun-Tzu detailed deception and subversion. Indian texts from Chanakya also contain matters related to espionage.

The world has thousands of years of experience with spying and other subversive activities, so it’s not out of place that Russia would use their intelligence agencies to spy on the world’s largest super power.

From that perspective, the US is probably the largest supporter of espionage for its own benefit. Not only does it spy on other nations and their activities, it spies on its own people as well, and has been doing it for a long time now.

And that brings us to the real matter at hand. How America reacts to being spied on by the American government and its many agencies.

According to allegations by the Electronic Frontier Foundation, the National Security Agency, or NSA, has “engaged in massive, illegal dragnet surveillance of the domestic communications and communications records of millions of ordinary Americans since at least 2001.”

Even before that incident, and more prolifically after, the media has been regularly covering instances of the NSA and other “security” and “intelligence” agencies spying on the American public. So far, not much has been done to curb these practices other than put them in the spotlight.

Note that the level of spying against US citizens escalated dramatically after 9/11, and NSA explicitly uses the tragedy to justify its actions against the American public. Take a look at these 10 “talking points” compiled by Jason Leopold of Al Jazeera America and Jason Smathers of MuckRock, after obtaining them from the NSA under the Freedom of Information Act.

Most of the information in the files was redacted for “security” purposes, but here are the talking points they gleaned from it. 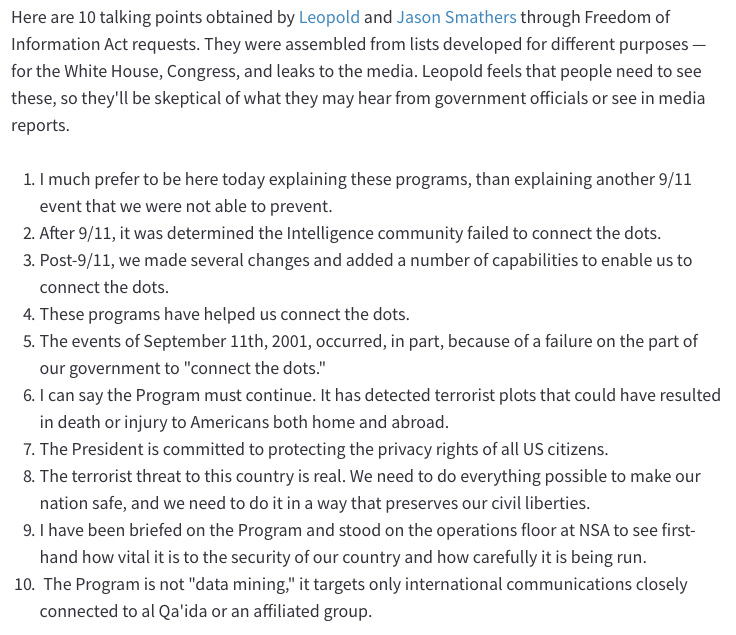 Next, here’s how it was used in public:

Clearly, there’s the question of privacy and constitutional rights on one side, and the need for security in order to prevent another terrorist attack on the other. And this is just one of hundreds of instances where the government has been exposed in the act of collecting information about its own citizens.

And that brings us to a more important point: is there any validity in the public panicking over being spied upon for the sake of its own safety?

There are, naturally, arguments for and against this sort of surveillance, there there’s really no line between “monitoring” and “spying”. What matters is how the public feels about it. But even on that, opinion is divided. While some feel that it is okay to be monitored if the level of security can be enhanced, many feel that it is a violation of their constitutional rights.

As for US agencies monitoring their own citizens, there seems to be no consensus about right or wrong here, just public sentiment and how the American public feels about it at a personal level. It can be argued both ways: If it elevates their level of fear, then perhaps it’s doing more harm than good; on the other hand, if it increases the level of security, then some things are worth sacrificing.

The issue here is one of trust. Does the public trust the government not to misuse the information it collects about them? Does the government trust its citizens to cooperate with them in order to preserve security?

Does that mean the American public is “safe” even though Russia is spying on them?

One thing we need to understand here is that any information collected during espionage is considered useless, unless and until it can be used in a disruptive or harmful way. That’s the premise under which most espionage is conducted, whether it’s between countries or between large corporations. All information possible is collected, but only relevant information is used.

In the case of Russia spying on the US, only information regarding government programs appears to be the target, not the general public.

There’s no solution to espionage. It’s as old as dirt and just as filthy. But it’s going to be around long after we’re all dead and buried. The only thing we can do is rationally think things through and assess the threat to ourselves, and then act on that assessment.

Personally, I don’t like Google collecting tons of data about me, either, but it’s not a threat to me because Google doesn’t benefit in any way by using that information against me.

Maybe the solution to the whole problem is simply to see things in perspective. Can this affect me in any adverse way? Do I need to react or take action? If I can, what is the likelihood that I will solve the problem that way?

Public discourse doesn’t always lead to an amicable solution, at least not where national security is concerned. Citizens will continue to worry about their privacy on one side and their security on the other, and the government will always do what it thinks is in the best interest of the nation. That’s its job. And it’s our job to put our opinions forward.

Freedom of speech is one of the most powerful rights that citizens have. Things you can say publicly in America can’t even be breathed into another person’s ear in some parts of the world. The government’s stand is that, in order to preserve that and other freedoms that Americans enjoy, some sacrifices need to be made in terms of personal privacy. It’s admittedly an unpleasant tradeoff, and not one that can be easily justified, but that’s where things stand.

If you’re against what the government is doing, you’re free to speak out. And thank God every day that you live in a country that allows healthy debate. And if you’re in a position to do something about it, by all means do so. But what you can’t afford to do is be an armchair activist and continually criticize the actions of others instead of saying something or doing what you can.

Privacy, security, safety, privileges, rights, obligations – these are all subjects of endless debate. The real question is: are you thinking rationally about how the situation at hand affects you, your town, your state, your country and your world? Or are you just knee-jerking without thinking things through?