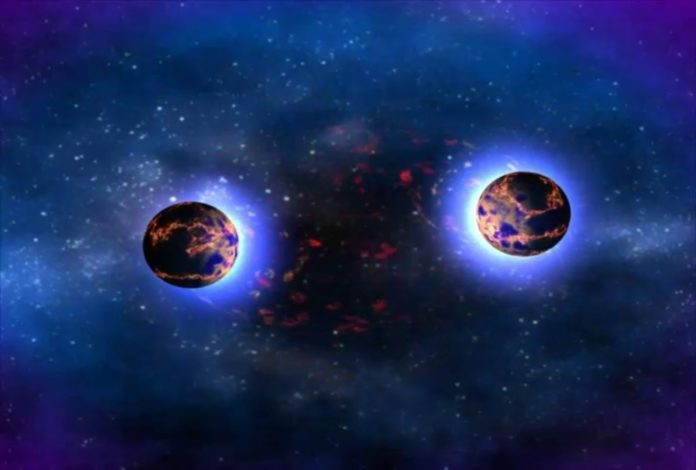 For the very first time in human history, we have been privileged to get more than just a glimpse of something far greater than our grandest achievements – the colliding of stars.

Earlier this month, the US-based Laser Interferometer Gravitational-Wave Observatory (Ligo) picked up an event of astronomical proportions. Literally. Two ultra-dense neutron stars, each not more than 12 miles across but each more massive than our sun, spiraled into each other, likely creating a black hole on impact.

What we earthlings were able to observe was only a portion of the entire event, which happened 130 million light years away. Scientists at two detectors first picked up tremors in space-time, then alerted the astronomy community around the globe. By the time all eyes were on the event, 70 telescopes in space and on the ground were able to see an afterglow. For the first time, a cosmic event was seen in both light and gravitational waves.

“What is amazing about this discovery is it is the first time we’ve got a full picture of one of the most violent, cataclysmic events in the universe. This is the most intense observational campaign there has ever been.”

It took 100 years for the existence of gravitational waves to be proved, a theory that Albert Einstein first put forth when he hypothesized about the ability of space to be squeezed and stretched. The proof came in 2015 when scientists at Ligo first detected black holes colliding. Detected, because these events were not even visible to traditional telescopes. What was detected was the intense burst of a beam of gamma rays, showering the sky with heavy elements like platinum, gold and silver. The event incidentally helped resolve an age-old debate about where these heavy metals originated.

This more recent event involved two neutron stars, the densest avatar of a star, hurtling towards each other in a spiral collision path at mind-boggling speeds. The gravitational waves were first detected when the stars begin orbiting each other 20 times a second. Less than two minutes later, their speed increased a hundred-fold and the started orbiting each other 2000 times a second, their forms being distorted by the intense gravitational forces involved. Two seconds later, after the briefest of calms before the storm, the stars violently merged, causing a burst of gamma radiation and jets of matter to funnel out of the poles, and the after-glow was seen around the world, 1,229,894,961,435,504,000,000 kilometers away. 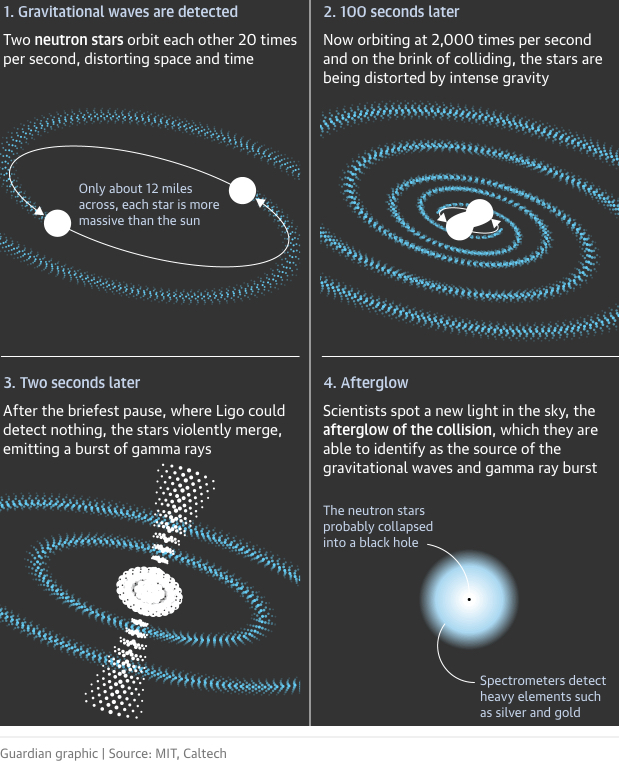 Spectrometers trained on the event detected heavy elements like silver and gold, and at the center of it all was what likely became a black hole.

Neutron stars are so dense that just a teaspoon of the material they’re composed of would weight about a billion tons. These stars were each 12 miles across, so you can imagine the tremendous mass leading to the intense gravitational forces at play. The centrifugal forces initiated by this massive gravity caused them to spiral around each other 20 times a second even though they were 200 miles apart, spinning around each other faster and faster until the inevitable happened – the merger of stars.

The part about the collision leading to the immediate formation of a black hole is theoretical. Nobody has seen a neutron star weighing more than twice what our sun does, and no black hole so small has ever been “seen”. The assumption is that such a collision would cause an instantaneous gravitational collapse into a black hole, leaving only dust and other matter.

The light from the event took 130 million years to reach us, so that’s how long ago this event actually happened. That’s around the time when plants started to flower, and about 10 million years after the famed “first bird”, the Archaeopteryx lived in Europe.

With this event, a new age of rapid-response astronomy has arrived, allowing astronomers around the world to be alerted within minutes of an event being detected. This is what allowed such a close observation of almost the entire event.

As for the formation of heavy elements, it has long been speculated that the force of impact in a neutron star or black hole collision would be enough to force neutrons into an atom’s nucleus, thereby forming heavier elements. Until now this has purely been theoretical in nature. Says Reitze:

“This is the first real confirmation that heavy elements such as gold, platinum and uranium are either solely or predominantly produced in binary neutron star collisions. The wedding band on your finger or the gold watch you’re wearing was most likely produced a billion years ago by two neutron stars colliding. That’s pretty cool.”

We finally know where materials like uranium, platinum, gold, silver and other heavy metals come from.

Of note is the fact that, just earlier this month, the three American scientists who helped develop Ligo were awarded this year’s Nobel Prize in Physics for detecting gravitational waves.

Below is an animated representation of the event and the days that followed the star merger now known as GW170817: