Hot on the heels of Panasonic CEO saying that the automation process for battery production for the Model 3 would soon kick in, causing production to rise sharply, Tesla Motors CEO Elon Musk has come out saying that a subcontractor was responsible for the delays at the Gigafactory.

Speaking to the media and analysts at the company’s third quarter earnings earlier today where the company posted losses that missed Wall Street expectations by a wide margin, Musk spoke at length about the problem.

He explained that there are four “zones” in the battery module production line for the Model 3. A systems integrations subcontractor was responsible for a “severe problem in one of them,” which resulted in Tesla having to rewrite the software for the zone from scratch.

Musk has been working out of the Gigafactory to stay close to the problem, but admits that the company did not realize the problem until recently.

That could have major implications on Tesla’s production and delivery numbers for the Model 3. During the third quarter, Tesla only managed about 220 deliveries against a target of 1,500. However, Panasonic CEO’s statement about automation being online soon could smooth out the problem during the current and last quarter of the year.

That said, Tesla has pushed its initial production run estimate of 5,000 units per week from the final quarter of 2017 to the first quarter of 2018, further delaying deliveries to the hundreds of thousands of people who have reserved a Model 3 for $1,000 since pre-orders opened earlier this year.

Analysts are also concerned about other near-term risks related to Tesla’s power generation and storage business, and their “eventual need to raise cash.”

As mentioned in our earlier piece, it’s quite possible that Panasonic’s announcement has once again set expectations at a level that Tesla might not be able to meet during the fourth quarter. That may have been watered down by Tesla’s revised production estimates, as above, but after-hours stock price shows that the next opening bell may well see TSLA trading below the $310 mark. 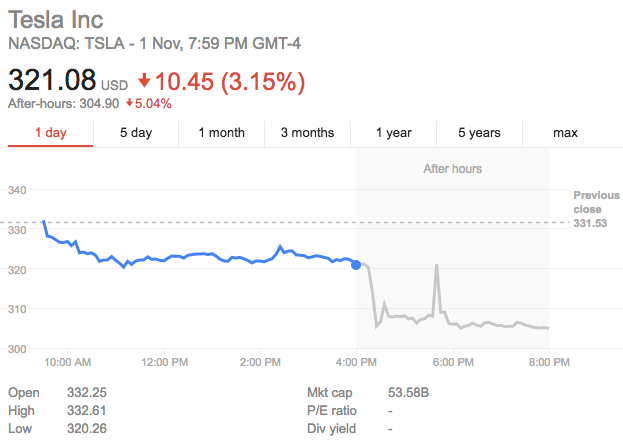